Improving Your House with the Nest Thermostat

Thermostats have always been difficult to work with, as most people will, probably, tell you. They are usually hard to program, requiring the user to press an endless number of arrows for their preferred temperature selection. Once it was selected, for a specific period of time, absolutely no adjustments are possible without going through the entire process all over again and ruining the programming. However, all that changed when Nest labs introduced to the world their programmable thermostat. The Nest Thermostat quickly won everybody’s hearts as a tool that is simple to use and definitely an improvement when it’s considered vs. the old solutions. 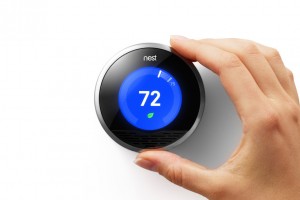 The Nest Thermostat - How It All began

The first key selling point of this ultimate generation gadget is the fact that it’s not just a thermostat, but a device that was originally the brainchild of two Apple engineers, Tony Fadell and Matt Rogers. Therefore, when they got on board, in 2010, and decided that all the other thermostats on the market were inadequate, the outcome was bound to be good.

As expected, the gadget saw huge success and was later on, in 2014, purchased by Google, along with the entire Nest Company. In the same year, the Nest thermostat became available in Canada and European countries as well, such as Belgium, Ireland, France, the UK, and the Netherlands, making the device a world-wide trend.

Negative Commentaries and Parody towards Google

Not everybody was pleased, though, when Google decided to purchase Nest and continue manufacturing the Nest thermostat themselves. There were voices that actually accused the giant corporation of using the smart thermostat in its never ending campaign of personal data collection. There was a German activist group, called Peng Collective, which, in 2014, initiated a parody website called Google Nest, which they used as a satire against Google, “releasing” fake products that imitated the Google ones, such as Google Trust, Google Hug, Google Bee, and Google Bye. Needless to say, the very next day lawyers representing Google issued a cease-and-desist letter to Peng.

Before you run out and buy the smart thermostat, there are certain features it has, regarding both hardware and software, which you must be aware of, seeing as it’s a smart device. Here they are.

The device has two main pieces of hardware: the display, which holds the circuit board and the rotating ring and the base, which contains the connection terminals, the bubble level, and the holes that one uses to anchor it to the wall. Neither one of these hardware pieces can function without the other, so it’s a good idea not to disassemble the device. Also, the Nest thermostat is coupled with a “Heat Link” piece that holds all the circuits needed to control the main voltage heating system. For people living in Europe, Nest sells a special edition of the thermostat there, which can control heating systems between 120 and 240 V. 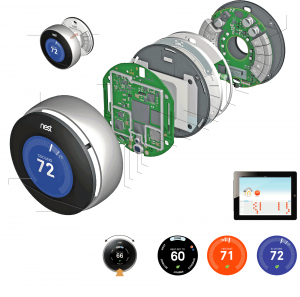 As far as software goes, although not technical facts, but still good to know about, are the following features: 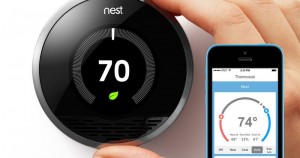 Before you will actually receive your own unit and start installing it, the people at Nest will advise you to use a compatibility widget you can find on their website. It’s actually a series of multiple questions you have to answer, in order to make sure your current heating system won’t experience any problems while you install the Nest.

After you’ve completed this step, as far as the actual manual installation goes, you can either install it yourself or call a professional for help, which the website will gladly assist you with as well. It will immediately locate those nearest to you and provide their contact details. But, if you want to install it on your own, you have to shut off power to the furnace and strip four wires (in average, because your mileage could vary), insert them in the holes in the base and then screw the base very tightly to the wall. Use the base’s level, which is built in, to make sure you got it on straight.

A great thing when it comes to installation is that, if you don’t have any tools around the house, you needn’t worry, as the Nest thermostat comes with a small, but very reliable screwdriver, which is worth its money.

The next steps are to plug it in and power it up, as far as hardware goes. For the software part, you need to setup your Nest account, which means entering your WiFi info and some details about your home, which your device will provide, if you don’t know them. After that, simply wait for it to learn your house’s particularities, which it will do in a matter of days. 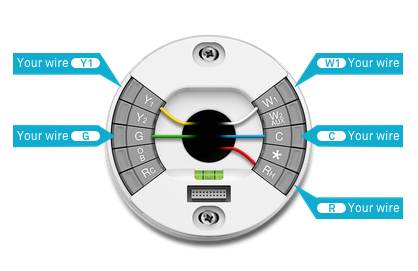 Being such a widespread device nowadays, as well as a real pioneer in its niche, the Nest has received many reviews in the past couple of years. You can find them in magazines or on dedicated websites, if you’re looking for a specialized opinion. If you’re more interested in actual user’s opinions, you can find commentaries and home-made reviews mostly on the sites that sell the gadget, such as Ebay, Home Depot, Lowes, Amazon, or the Nest site itself. Also, this is the place where you can buy the thermostat and work on your savings as well. As far as buying is concerned, the resellers have it up all year round, they provide discounts, allow you to use coupons, put them on sale in certain periods, and organize Black Friday.

If you were wondering how much money you need to spend, the price differs from store to store and it depends on the generation you want to buy. The Nest thermostat has had three generations so far, all with a different cost range: the 1st generation appeared in 2011, it’s smaller and has a thicker profile, the 2nd generation was launched in 2012, and the 3rd generation in 2015. 2nd and the 3rd are superior to the first, as far as both hardware and software go.

According to most reviews online, here are the pros and cons of the Nest thermostat:

All in all, the Nest thermostat is a much loved and widely used device around the world. It literally changed the game and improved the way in which we set up the temperature in our homes, making it a lot easier to control and allowing us to save money on heating.