Propane generators are popular among campers, contractors, or companies that cannot risk a power outage compromising their activity. These are the main reasons why you would choose a propane powered generator instead of a gas one:

However, propane is not as efficient as gasoline. If the temperatures drop below 20F, it becomes almost useless. In addition, propane powered generators have a more complicated fuel system – therefore, they are more likely to fail or break and cost more to be repaired. Here are our reviews for the best propane generators for sale in 2016: 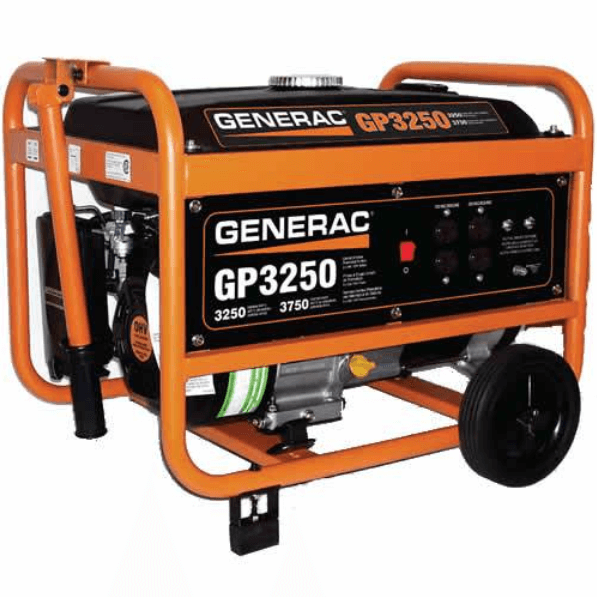 Before diving into the best propane generators of 2016, we need to first talk about 2 important notions: Surge rating and running power rating.

Generac propane portable generators are reliable as backups or for short work projects. They are easy to transport and use thanks to a smart design. Although the Generac 6000 and 6001 don’t impress knowledgeable buyers with performance, their design is faultless. They weigh less than most portable generators of similar or larger size and is perfectly balanced.

The Generac LP 3250, or model 6000, has two regular power outlets of 120V and a rotating 120/240V one that increases its usability and convenience. Its propane tank holder is attached to the outer frame of the generator, which further increases its ease of use. Generac’s suggested retail price for their 6000 model is $609 – much cheaper than other models.

The LP 3250 has a rated running output of 3250 Watts, but can provide up to 3750 Watts – its maximum starting output. It has a 20 lb tank The Generac 6000 is an average portable propane generator that can be comfortably used during a power outage. With a full tank, it can run for 9 hours at 50% capacity.

The Generac LP 5500, also known as model 6001, is a propane portable generator which is able to provide a surge power of 6,875 Watts for 10 seconds and a rated alternative current running output of 5500 Watts. It can hold a 30-pound tank or almost 5 gallons of propane. Generac’s suggested retail price for the 6001 model is $799.

If the LP5500 has a downside, it would be its short running time. When working at half of its maximum capacity, Generac’s 6001 model can power appliances for a little over 11 hours. While this is an average time, it still cannot compare with top models which can work up to 14 hours at 50% capacity. We’re not thrilled about its efficiency either: The Generac 6001 burns a little over 1 gallon per hour when working at 50% of its maximum capacity.

The GEN series from Sportsman are dual-fuel generators that can use propane or gasoline to provide a reliable amount of power during outages. In addition, they feature a circuit interrupter that shuts the devices off when detecting its current is running through an unintended path, thus increasing the generators’ safety.

However, their downside is hard to ignore: With an 80 dB average noise output, they are loud – extremely loud if we think about other propane powered generators. Therefore, generators in the Sportsman GEN series are not recommended to campers or workers who plan on using it often.

The Sportsman GEN 4000 LP has a power surge rating of 4,000 Watts and a running power output of 3,000 Watts. While of average performance, it can successfully power a small home for a few hours.

The Sportsman GEN 7500 DF’s surge power rating, on the other hand, is of 7,500 Watts and a running power output of 6,000 Watts. Since it is able to run for about 9 hours on 6.2 gallons of gasoline, its fuel efficiency is below average. However, it makes up for the low efficiency by having a set of convenient features. It has no less than 7 outlets: 4 regular household outlets, one RV outlet of 120 Volts, a 12-volt direct current outlet, and a 120/240 Volts rotating outlet that can support industrial machinery.

The Cummins Onan Residential RS Series is famous for its propane generators for home. Their most noteworthy feature is the patented enclosure, which not only helps with ventilation but drastically reduces the noise output to 62 dB. Therefore, generators in the Cummins Residential RS Series are the quietest in their class. They are next-level generators that can be monitored and controlled remotely, via internet. Their price is close to $10,000.

The Cummins Onan Residential RS 20A/AC is a full-use generator that is able to function at temperatures well below the freezing point. The Cummins Onan Residential RS 14F, on the other hand, is not equipped for cold weather. Nevertheless, they both can provide energy for a whole house given enough propane. In fact, they are able to power a 15,000 BTU air conditioner in the middle of summer and still have some power available for a handful of smaller appliances.

The Winco HPS 6000 HE has a 5500 Watts rated running power and a 6000 Watts peak power output. It has a 7-gallons tank and can run for 7 hours at full load. If only functioning at half of its full load, the HPS 6000 HE can continuously run for almost 10 hours.

For generators, Powerland is specialized in tri-fuel appliances. Although a bit noisier than other propane powered generators, they still are considerably quieter than generators using other types of fuels.

The Powerland 6500 has a peak power of 6500 Watts and a rated power output of 5500 Watts. It features a wheel kit and handle, which makes moving the generator around convenient. As for the price, it starts off at about $800 – cheaper than top models.

The Powerland 8500 has a 7-gallon fuel tank. Its peak power output is 8500 Watts and a rated power output of 7000 Watts. With a recommended retail price of a little over $1,000, it is considered an average generator that is best to be used as a backup.

The Powerland 10000 has a recommended retail price of $1,200. Although it might seem a bit costly, it definitely is the best propane generator by Powerland. Its peak power output can reach 10000 Watts, while its rated power output averages 8000 Watts.

All in all, Powerland generators are a viable choice for those who only want a backup generator. However, if you plan on using the generator often, you should probably choose a different brand.

Propane generators are reliable and usually highly efficient. Although a bit more expensive than other types of generators, they quickly pay for themselves. For smaller, portable models, the price difference is not considerable. More powerful models that can be used to power a whole house during a power outage are considerably more expensive, but quality will always be directly proportional to their retail price.