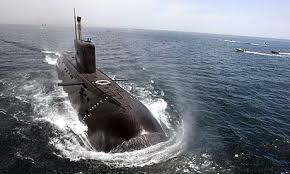 Heating Submarines
A submarine is mostly all metal, and metal is an excellent conductor of heat. The surface area of a submarine is large. The ocean is filled with convection currents, caused by the sub’s motion. This makes the heat transfer between submarine and ocean an active process. The temperature’s difference between the sub and the ocean is small, the total heat transfer is considerable because of the large contact area.
There is continuous production of heat, given off to the submarine air by hot engines, storage batteries, galley stove, electric lights, electric heaters, other devices, and human passengers. There is continuous production of moisture, given off to the air by evaporation from these same four main sources. The moisture production averages about 1000 pounds of water per day.
If the submarine is running on the surface, it is an easy matter to discharge this excess heat and moisture outboard. When the submarine is submerged, heat cannot be discharged outboard, and must be eliminated during recirculation of the air.
If the submarine is warmer than the ocean water, the interior heat of the vessel gradually passes through the shell into the water. The temperature of the air inside drops and, when it reaches the dew point, the water vapor in the air begins to condense on every available surface. So, the interior surfaces of a submarine are coated, with cork paint, to prevent or reduce this condensation to a minimum. The beginning of the condensation, however, depends upon the dew point, and this can be controlled by air-conditioning. Therefore, air-conditioning is just as essential for this purpose as for the comfort of the crew. It is always advisable to lower the dew point before a dive.
But, if the ocean is warmer than the submarine, there is a passage of heat from the water into the ship. However small this may be, it adds to the interior heat. The same result occurs if the loss of heat from this vessel to the ocean is less than the interior heat production. In hot summer weather, especially in tropical and subtropical regions, the air temperature in a submarine may rise to fairly high levels.
Air Conditioning the Submarine
In a submarine, there is only a few cubic feet of space available for air-conditioning equipment, and the cooling capacity is limited. The purpose of the air-conditioning system is not to cool the whole submarine. Let’s assume the air contains enough oxygen for the needs of all the occupants within the given space. A supply of oxygen compressed in cylinders is carried on board submarines to be released into the air as needed.

The submarine has room enough for air-conditioning machinery to control the dew point. Control of the dew point means control of the relative humidity, and the relative humidity is the factor of major importance.
Lowering the Dew Point.
The dew point of the air is the temperature at which that air is saturated with moisture. If the temperature of the air is then further lowered, some of the moisture must condense out.
The air in the submarine room is drawn by fans into and through the ducts to the air-conditioning evaporator. In passing over the cooling coils, its temperature drops below its dew point and part of its water vapor condenses out, inside the evaporation cabinet. The condensed water is not permitted to get back into the air, but is drained off into a tank. The air, now lower in moisture content and slightly lower in temperature also, continues its flow through the ducts and is finally blown out into the room again. This conditioned air mixes with the moisture and warmer air still in the room, resulting in an over-all condition that is drier than the original unconditioned air.
Air-conditioning in the tropics.
In hot climates, the air-conditioning system must be operated at maximum capacity. The procedure is to operate the compressors at full speed and the blowers at a speed that the temperature of the air from the discharge side of the evaporators is below the dew point. The conditions of high air temperature in the tropics are naturally adverse to effective air-conditioning, especially when the large area of open water surfaces in the bilges is considered. The plant must be run to obtain maximum comfort and protection of equipment against moisture, both of which are obtained by removing the large quantity of water vapor from the air. This condensing process is accomplished by always maintaining the temperature of the discharge air from the evaporators below the dew point.
Nuclear Submarines
The nuclear submarine, USS Sea Wolf was the only U.S. submarine to have a sodium-cooled nuclear power plant. It was commissioned in 1957, but it had leaks in its super heaters, which were bypassed. In order to standardize the reactors in the fleet, the submarine's sodium-cooled reactor was removed starting in 1958 and replaced with a pressurized water reactor.

A liquid metal cooled nuclear reactor, liquid metal fast reactor or LMFR is an advanced type of nuclear reactor where the primary coolant is a liquid metal. Liquid metal cooled reactors were first adapted for nuclear submarine use but have also been extensively studied for power generation applications. They have safety advantages because the reactor doesn't need to be kept under pressure, and they allow a much higher power density than traditional coolants.