Contents hide
1 Everything you need about an air handler
1.1 What is an air handler?
1.2 Types of air handling units
1.3 Differences and similarities between a furnace and an air handler
1.4 In-depth look at air handler components
1.4.1 All Things HVAC
1.4.2 HOME
1.4.3 ABOUT
1.4.4 SOCIALS

Everything you need about an air handler

Also known by the name of air handling unit, this device was designed to circulate and control air through air conditioning, heating or ventilation systems. The metal box of an air handler unit usually comprises cooling and heating elements, a blower, dampers and filter racks. Most of the times, air handlers are linked to the ductwork ventilation system, which is in charge of distributing the air in the entire house before taking it back to the air handling unit. Air handlers are usually installed in well ventilated areas where the device is kept away from humidity and condensation. If you were planning to place your air handler in attic, you might want to reconsider your choice. In the event of the air handler leaking water, you could find your entire house flooded and a hole in the roof of your bedroom.

What is an air handler?

A structured framing system, an air handler can be used locally, comprising only a blower, an air filter and a coil. These types of air handlers are known as terminal units. Larger air handlers do not condition recirculated air, but only outdoors air. These are also called makeup air units. An important part of the air conditioning system, the air handler is in charge with circulating conditioned air throughout your home.

Since homeowners and building owners have different needs regarding the rooms to be cooled down in the summer or heated up in the winter, there are a few types of air handling units on the market to choose from.

Differences and similarities between a furnace and an air handler

Furnaces generate heat for a house or a building by burning fuel. They distribute the resulted heat throughout the rooms via ducts. In comparison, an air handler will blow either cool or hot air in the building via ducts. The two devices look the same, which makes many people mistake one for another. But their uses, specifications and applications are different. The biggest difference consists in the heating system they use. Generally, furnaces will work on heating oil, liquid propane or gas. On the other hand, air handlers are commonly paired with an electric heat pump. 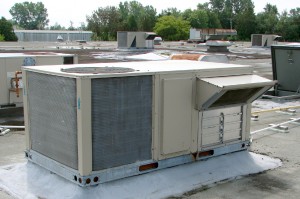 A quick look at the structure of a furnace easily sets it apart from air handling units. Furnaces comprise four essential parts: the combustion chamber (also known as the burner) where the furnace burns the fuel; the vent, which discards carbon monoxide outdoors; the heat exchanger, which transfers the heat produced by the burner to the air supply of the building; the blower, which pushes the hot air in the house via ducts. If the furnace uses heated water within steam pipes instead of hot air through ducts, they are generally called boilers.

Working with a heat pump, air handlers use refrigerants to transfer heat energy from point A to point B. The blower of the handler will push air in the entire house, with the refrigerant lines running in the air stream. In the summer, the refrigerant will do the exact opposite: it will extract heat from the air, transferring it outdoors. This way, the air handler will cool down the building by blowing cool air inside. In the winter, the same refrigerant will pull heat energy from the outdoors air, transferring it indoors and heating the rooms with warm air. However, the air handler doesn’t cool down nor does it heat up the air, but it simply pushes it through the refrigerant lines that are in charge of switching between temperatures. This constitutes the major difference between a furnace and an air handling unit.

A thing that furnaces and air handler have in common are filters. When using either one of these devices, the quality of the air is maintained by employing filters to trap impurities and dust from the air. As long as filters are changed on a regular basis, the devices will work flawlessly. Furnaces and air handler units are both constantly incorporating outside air into the flow of air passing through the building. Another similarity between the two devices is that they are controlled by a thermostat.