Insulating your home, building or office for the winter is a very good idea, for a variety of reasons. The first one would be reducing costs as far as heating, gas and electricity bills go. Comfort is also important, as through insulation we’re trying to keep our homes as warm as possible. And last but not least, we’re always trying to be as eco-friendly as possible. The less energy we consume, the greener we are. But insulating our homes may not be as easy as it appears at first glance. There are some rules and regulations to comply with, because insulation needs to be done after a certain general standard, imposed by the law. Here is your 101 on how to comply with the building code enforcement this winter.

All building regulations serve under the International Building Code, a model building code which was developed by the IIC or International Code Council and has been adopted by most of the states in the US. The European Union has its own code, called the Eurocode, as does Canada with the National Canadian Building Code.

In the US, the organizations that adopt model building codes statewide are the state governments, counties, fire districts and municipalities. Some private sector model codes do exist. They are funded by the federal government and used by the Department of Defense, the National Park Service, the Department of State and the Forest Service. This is due to the fact that their buildings have special features.

History has shown that a model building code has a medium life span of 3 to 5 years, after which it should be updated. So, you have don’t a code in 2009, 2010, 2011 and so on, but rather a 2006 edition, a 2009 one and another in 2012. The stress here is on updating the existent code. Because organizations don’t come up with a whole new building code every 3 or 5 years, but, rather, bring forward new and improved versions of the current one.

Also, an important thing to mention is the fact that the new versions are not automatically adopted. This means that when the new variant comes out, some states or jurisdictions or a certain county might choose not to adopt it, but rather to continue running on the old one. The reason why this happens is because, normally, it takes a lot of time to adopt a new model. It must be voted upon, the officials or congress need to sign it and all the inspectors must receive training on it. An exam can be taken and reports are made.

This is very important for you to know, so it might be a good idea to inquire exactly which version your state or city is using when deciding to insulate your home.

Most of the Building Code’s body of text refers to prevention against fires and it has regulations that establish the number, size and location of fire exists. But, seeing as it is a 700 page book, it includes many chapters on safety, residential buildings and insulation, as follows:

You can also find the building code online, in PDF or E-laws format, available for free download.

Although, as mentioned above, most of the states have adopted the uniform International Code, there were some that have had problems with it. The most famous case is California. Their National Fire Association division or NFPA, joined the ICC at first to create an universal code. But misunderstandings lead to the NFPA’s withdrawal from the project and teaming up with International Association of Plumbing and Mechanical Officials (IAPMO), the American Society of Heating, Refrigerating and Air-Conditioning Engineers (ASHRAE) and the Western Fire Chiefs Association to create their own codes. In 2002 they published the Comprehensive Consensus Codes, which includes the famous NFPA 5000 that California quickly adopted. Although it was dropped when Governor Schwarzenegger was elected, it still caused disparity between California and other states, such as Florida, New York and Michigan.

Recommendations made via the Building Code Enforcement on Insulation

First of all, one thing you should know about is the R-value, because this is the most common term you will come across while researching or reading about insulation. The R-value is a measure of thermal resistance for a particular material, where R means how thick the material normalized is to thermal conductivity. 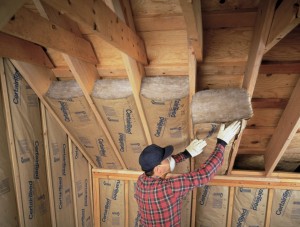 Another important part covered in the building code enforcement that is linked to insulation is efficient energy use. These requirements are quit strict because the states, headed by NYC  and California, which began enforcing its regulations around 1968, have noticed that it really does work. When efficient energy use rules are put in place, energy consumption remains flat. This is the main reason why they have building code enforcement officers as well. Here are some of the requirements, so that you can get approval:

The rules, regulations and requirements of the building code regarding insulation are not difficult as far as code compliance goes, even if we are talking about the situation where you build a new house or insulate an existing one. All you have to do is make sure you do your homework before you start planning and designing.