Applications, Specifications and Notes on R134a

Refrigerants are fluids that are used in refrigeration cycles and heat pumps. Most of the time, a refrigerant will undergo a transition from liquid form to gas back and forth. The main criteria that a refrigerant has to meet is safe usage, flammable-free and toxic-free properties. Most refrigerants nowadays are especially designed to avoid causing climate changes or ozone depletion, created to have the best thermodynamic abilities possible.

Understanding what R134a refrigerant is

Known as the best automotive refrigerant for replacing R12, R134a is a cheaper, more reliable alternative that has been almost unanimously accepted as a replacement for the previous automotive refrigerant. Also known under the name of Tetrafluoroethane (CF3CH2F), R134a is part of a family of refrigerants that don’t damage the ozone layer, like the previous CFC products did. Non-corrosive, non-flammable and non-toxic, R134a is now being used in reciprocating compressors and centrifuges. Widely used within the air conditioning systems of new cars, it is also employed by pharmaceutical companies as a propellant and by manufacturers in producing plastic foam.

There are plenty of choices for automotive refrigerants on the market, ranging from drop-in replacements, to expensive alternatives or very cheap products. Most of the times, a cheap price tag is a clear indicator of the automotive refrigerant’s performance. You might be thinking you’re stretching a buck acquiring a cheap refrigerant, but you might find out you need special equipment for evacuating the gas and disposing of it properly.

Most common applications for R134a

R134a is not only used for air conditioning systems on cars. Their most common uses include:

Choosing between R12 and R134a

Since R134a was especially created to replace R12, it’s safe to assume the former is a better choice. Although the production was stopped, buyers can still find R12 in shops within a limited stock. As a result, the price is bigger per pound in comparison with the R134a. If you’re currently using R12 and for some reason you’re still reluctant to jump ship and start using R134a refrigerant, you can continue using the old product as long as you can still acquire it. However, bear in mind that R12 to R134a conversion is inevitable and, at some point, you will have to switch to the new version of automotive refrigerant. 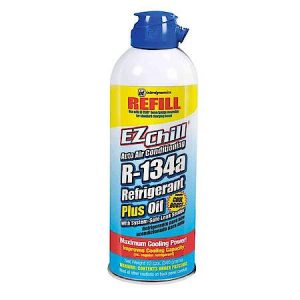 There has been some doubts regarding the efficiency of R134a, with some claiming the previous version, R12, was more efficient. But they couldn’t be more wrong. Despite the fact that it needs more efficient condensing, R134a is undoubtedly more efficient than its predecessor. However, the performance of the R134a automotive refrigerant will also depend on the air conditioning unit that is using it and the amount of refrigerant that is being used.

In order to compare R134a with R12 as far as efficiency is concerned, two identical cars were equipped with equal amounts of different automotive refrigerants. It has been found that the vehicle which received R134a was able to remove more heat than the other identical car, which was using R12.

The performance of R134a factors in different things, with the most important ones being the condenser, the expansion valve with the superheat setting and the amount of automotive refrigerant. Provided a condenser was created to release large amounts of heat, this will help remove the heat expelled by the R134a refrigerant from the car. Matching the ideal amount of R134a that needs to be used in a car, you can balance out the heat that is sucked out by the evaporator and discharged by the condenser.

Before judging an automotive refrigerant’s efficiency, you should also factor in the efficiency of you air conditioning system. A faulty unit that has a dirty or clogged condenser, an expansion valve that is malfunctioning and infiltrated water within the system will hinder the R134a automotive refrigerant to work at its full potential.

It’s not uncommon for car owners to take on the task of switching from R12 to R134a on their own. While this is not impossible, it can be a little tricky, especially for a novice. Most people head out and buy a cheap kit from a nearby auto parts store. What do you get in these retro-fit kits? They usually come with some R134a cans, a few O-rings, a high side pressure gauge and some generic charge port adapters for the R134a. What essentials are missing? The package should also include a recovery system for the refrigerant, a vacuum pump, as well as a set of gauges comprising high and low side gauges.

The process of converting to R134a is not complicated, but it can be challenging. Bear in mind that charging and evacuation should be done by a professional air conditioning system technician that has experience with R134a and is familiar with your car. If the system is empty, the first step in starting the conversion process would be unplugging the clutch wire and loosening the belt of the air conditioning. Take out the compressor and discard the old oil by holding it upside down. If it’s possible, pour the old refrigerant in a container and check to see if there are any metal particles or gelled oil bits. These indicate the need of performing a liquid flush for the evaporator, the lines and the condensers.

The following step involves recharging the compressor with around 5 to 6 ounces of ester oil. The amount of oil you have to use depends on the vehicle. Some cars might require lower amounts, while older models that are less efficient will need more air conditioning ester oil. After you have successfully completed these steps, you can put the compressor back in its place. You will want to reattach all the hose lines with adequate O-rings that are compatible with R134a. You’ll also want to take the time to lubricate them with some compressor oil. Next on, reattach the air conditioning belt and plug in the clutch wire. After you attach the port adaptors, you will also need to replace the old drier. Install a new one that contains an R134a compatible desiccant, also using brand new O-rings. If your vehicle lacks a high pressure switch in the air conditioning unit, it is highly recommended you install one.

Other things to consider