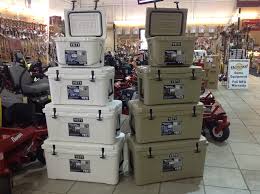 The Seiders brothers (Roy and Ryan) set out to make a cooler that could stand up to abuse. A cooler that could be used as a seat, a casting platform, storage for fish, and keep drinks cold. The Seiders brothers founded the company, Yeti Coolers, Austin, TX. They developed a boxy design with a simple white paint job to deflect the sun’s rays. You can find the coolers at construction sites, oil fields, and camping sites. They are found at Coast Guard’s and military bases. They are used by doctors and veterinarians to transport organs. A lot of your college kids are buying them too.
The Interagency Grizzly Bear Committee has granted the coolers a seal of approval. They are made like a normal cooler, but have more plastic and polyurethane foam walls. Yeti’s Tundra line comes in 11 different sizes, ranging in price from $229 to upwards of $1,300. The Tundra 420 is a 110-pound ice chest.
According to the company, total revenue has exploded, from $30 million in 2011 to more than $100 million so far in 2013. Bass Pro Shops (Outdoor Equipment Shop) states they can’t keep them in stock. They are appealing to campers and hunters. Buyers may select from several models; Realtree camouflage, Green Egg grills, Copenhagen snuff, and Mello Yello.
Go to Yeti’s official website and watch a video of a grizzly bear trying unsuccessfully to pry the coolers open. LINK: http://yeticoolers.com/grizzly-proof/
Quoted from YETI:
“YETI Coolers are built to be indestructible and keep ice for days. Built for going toe-to-toe with hungry grizzlies.
Built for the prepared. Built for better Monday morning water cooler talk. Built for the long haul. Built for the wild.”