Willis H. Carrier is the true American success story and symbolizes everything that is great about this country. Good old American ingenuity at its best! 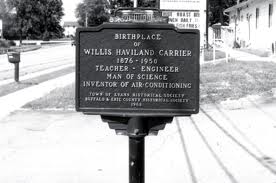 He was the only child born to Duane William Carrier (1836-1908) and Elizabeth R. Haviland (1845-1888). Willis Haviland Carrier was named after his mother’s uncle-in-law Willis Hoag Haviland, with whom she lived after the death of her father in 1868. The family lived on a farm near the snowy eastern shore of Lake Erie in Angola, NY.

Carrier’s mother Elizabeth was known for her mechanical skills and ability to fix clocks and sewing machines. Even though she died when Willis was only eleven, she taught him many things including fractions by having him cut apples into halves, quarters and eights then add and subtract the parts. Carrier said. “Fractions took on a new meaning and I felt as if no problem would be too hard for me – I’d simply break them down to something simple and they would be easy to solve.” “My mother opened up a new world to me and gave me a pattern for solving problems that I have followed ever since.”

A friend recalled Willis in high school working on geometry problems outside, during a snow storm, oblivious to the weather conditions around him. He was said to be obsessed with the idea of becoming an engineer. So it is no surprise he won an academic scholarship to Cornell University in Ithaca, NY. Though his tuition was paid for by the state, he had to work to earn his room and board with a series of odd jobs. He stoked furnaces, mowed lawns and during his senior year, formed a co-op student laundry.

Willis Haviland Carrier graduated in 1901 with a Masters Degree in Mechanical Engineering. At times you may see him referred to as Dr. Carrier; he was awarded an honorary doctor of letters from Alfred (NY) University in 1942 for his many achievements and contributions to science and industry. 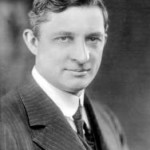 In June of 1901 Carrier landed a job at the Buffalo Forge Company in their new experimental department manufacturing heaters, exhaust systems, and blowers used to dry lumber and coffee as a Design Engineer. His pay was $10.00 per week. Through Carrier’s research and development he came up with a formula to accurately calculate heating equipment requirements, size and corresponding tables. This saved his company countless man hours and over $40,000 on one job alone in lost productivity fixing systems designed flaws.

Only 25 years old and barely a year out of college, Willis Carrier was made head of the company’s department of Experimental Engineering. It was then he was as assigned the challenge to find an answer to a humidity problem at Sackett-Wilhelms Lithographing & Publishing Company of Brooklyn, NY.

The Father of Modern Air Conditioning:

Moisture levels inside the printing plant were causing the paper to expand and contract resulting in production problems. Using National Weather Tables Carrier was able to determine appropriate humidly and temperature levels. He then began to design a system to achieve these criteria. The result of his working to adjust the humidity control, air flow, temperature levels, proper sizing and capacity of the system he designed for this printer is considered by authorities to be the first scientific “modern” air conditioning system. And only a year out of college!

After several more years of refinement and testing, on January 2, 1906 Carrier was granted a patent of his invention, which he named “Apparatus for Treating Air”. The very first sale of the new invention was made to the La Cross National Bank in 1906. Carrier claims he developed the idea for mass distribution of his invention while standing on a railroad platform in Pittsburgh, PA contemplating the effects of temperature on that city’s smog.

Buffalo Forge formed a new subsidiary, calling it Carrier Air Conditioning Company, in honor of the famed engineer. By 1914 Carrier had designed and installed air conditioning systems in factories, breweries, bakeries, processing plants, and department stores. But World War I brought difficult times for Buffalo Forge and they shut down the speculative division of air conditioning. After 12 years of employment Willis Carrier left Buffalo Forge. Carrier along with six of his engineer friends pooled together $32,600 and formed Carrier Engineering Corporation in New York on June 26, 1915. Some early customers were The White House, U.S. House and Senate, and Madison Square Garden just to name a few. They also installed systems in submarines, buses, and air planes. In the 1920’s as his systems became more refined and the industry improved, residential systems were developed. 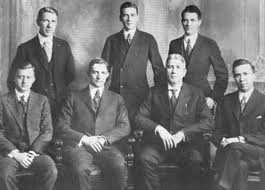 In 1937 Carrier moved the company to Syracuse, NY. It became the area’s largest employer. He also started Toyo Carrier of Japan in 1930, which is still the largest producer of air conditioning in the world. The Great Depression and stock market crash of 1929 and early 1930s’ caused financial hardship. Carrier merged with Brunswick-Kroeshell Company and York Heating & Ventilation Corporation to form Carrier Corporation, with Willis Carrier as Chairman of the Board.

Dr. Carrier was married three times. He met and married his first wife Claire Seymour while still attending Cornell University. She died in 1912. He then

married Jennie Martin. Carrier adopted her two children, neither survived to adulthood. He fathered no children of his own. Jennie died in 1939. His third wife was Elizabeth Marsh Wise died in 1964. All are buried at Forest Lawn Cemetery on lot 76 in Section 15 in Buffalo, NY. Carrier was a Presbyterian, a Republican and enjoyed playing golf. Willis Haviland Carrier died on October 9, 1950 shortly before his 74th birthday.

Of all the modern conveniences that we take for granted air conditioning has made one of the largest impacts on our society. It enabled the southern regions and climates to prosper and grow. Productivity of workers in factories to increase, solve production humidity problems not mention quality of life improvement. It has made our homes so much more comfortable. Thank you Willis H. Carrier!

“I fish only for edible fish, and hunt only edible game even in the laboratory.” – Willis Carrier on being practical.