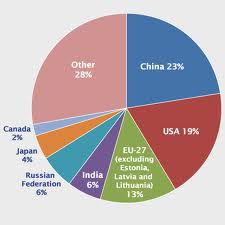 Overview
Americans make up only 5% of the world’s population and yet consume 20% of its energy.
The United States is the 2nd largest energy consumer in terms of total use. The U.S. ranks seventh in energy consumption per-capita after Canada and a number of small nations. The majority of this energy is derived from fossil fuels: in 2010, data showed 25% of the nation’s energy came from petroleum, 22% from coal, and 22% from natural gas. Nuclear power supplied 8.4% and renewable energy supplied 8%, which was mainly from hydroelectric dams although other renewables are included such as wind power, geothermal and solar energy.
Regional
Household energy use varies significantly across the United States. An average home in the Pacific region (consisting of California, Oregon, and Washington) consumes 35% less energy than a home in the South Central region. Some of the regional differences can be explained by climate. The heavily populated coastal areas of the Pacific states experience generally mild winters and summers, reducing the need for both home heating and air conditioning. The warm, humid climates of the South Central and South Atlantic regions lead to higher electricity usage, while the cold winters experienced in the Northeast and North Central regions result in much higher consumption of natural gas and heating oil. The state with the lowest per capita energy use is New York, at 205 million Btu/yr, and the highest is Wyoming, at slightly over 1 billion Btu/yr.

On average, one American consumes as much energy as:
• 2 Japanese
• 6 Mexicans
• 13 Chinese
• 31 Indians
• 128 Bangladeshis
• 307 Tanzanians
• 370 Ethiopians
The population is projected to increase by nearly 130 million people the equivalent of adding another four states the size of California by the year 2050.
The US consumes far more energy than any other country — more than China and Russia put together. That’s really extravagant! Imagine if you wasted five times more gasoline as your neighbors or five times more food or produced five times more garbage. Your neighbors wouldn’t be very happy! Yet, that’s what we’re doing.
How much energy does the average American consume? Well, if you list the countries of the world in order by their population (as we’ve done in the graph above), the U.S. comes in third… but the combined energy consumption of the other five largest added together doesn’t match U.S. energy consumption! In other words, the 5% of the world’s population that lives in the U.S. has more environmental impact than the 51% that live in the other five largest countries.

The world’s energy resources are not equitably distributed throughout the world. Some countries are rich in resources, while others lack resources. Industrialized nations consume a disproportionate share of the world’s energy resources. The availability of resources, the climate, culture, level of industrialization, and economic well-being contribute significantly to the type and amount of resources consumed in different countries. Countries in the Northern Hemisphere use more energy resources and are more industrialized than countries in the Southern Hemisphere.
World Population and Energy Consumption
The population problem isn’t just a matter of the number of people. People consume food, fresh water, wood, minerals, and energy as we go about our daily lives. And producing food, pumping groundwater, harvesting wood, mining minerals, and burning fuel all deplete our resource base.
The energy consumption growth in the G20 slowed down to 2% in 2011, after the strong increase of 2010. The economic crisis is largely responsible for this slow growth. For several years now, the world energy demand is characterized by the bullish Chinese and Indian markets, while developed countries struggle with stagnant economies, high oil prices, resulting in stable or decreasing energy consumption.
According to IEA data from 1990 to 2008, the average energy use per person increased 10% while world population increased 27%. Regional energy use also grew from 1990 to 2008: the Middle East increased by 170%, China by 146%, India by 91%, Africa by 70%, Latin America by 66%, the USA by 20%, the EU-27 block by 7%, and world overall grew by 39%. 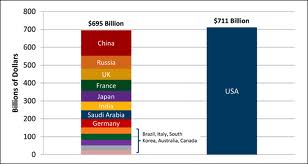