Link to their Web page:  http://www.coolsound.us/ Click the links on the left side of their screen to learn more about The Technology.

Link to Wikipedia site for a very detailed description of thermoacoustics: http://en.wikipedia.org/wiki/Thermoacoustics

The history of thermoacoustics is thought to have started 200 years ago with European glass blowers that noticed sound generated when a cold glass tube was placed next to a hot glass stem. The theory of thermoacoustics refrigeration was identified more recently when heat transfer phenomena was observed in a gas resonating in a cylinder. Ten years later, the use of oscillating fluid particles to induce a cooling effect resulted in the development of a “cyrocooler”. In the late ’80s, thermoacoustic research was pursued at the Naval Postgraduate School where a 5W Space Thermoacoustic Refrigerator, dubbed STAR, was developed and launched aboard the Space Shuttle Discovery (STS-42) in 1992. The Navy demonstrated the use of thermoacoustics and cooled off the electronics aboard the USS Deyo in 1995. More recently, interest in thermoacoustics has intensified, motivated by its relative mechanical simplicity, potential for broad integration into industrial and consumer applications and benign environmental impact.

At present, only low temperature applications have been commercialized in niche markets. 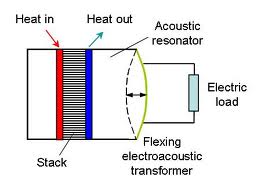 Thermoacoustic uses high-amplitude sound waves in a mixture of harmless gases to create oscillations in pressure, temperature and displacement, which are used to pump heat. These effects can be harnessed to produce powerful and efficient heat engines, including heat pumps and refrigerators.
High amplitude sound waves are generated inside a specially-shaped cavity pressurized to several atmospheres. The resulting pressure fluctuations can be designed to occur hundreds or even thousands of times per second and can generate temperature differences. The temperature differences occur across a stack of plates  which are positioned between hot and cold heat exchangers, where the heat is removed or added to a system.

Acoustic waves oscillate an armature within a magnetic field and produce electricity. In heat pump applications, heat is forced to move against its natural tendency to flow from hot to cold, which consumes most of the energy in air-conditioners and refrigerators.

Follow the links given and learn more about Thermoacoustics.