Published by
AllThingsHVAC
Last updated:
May 3, 2016

Top through the wall air conditioners and their reviews

Reviews give this one 6.5 out of 10. That is because it lacks some main features and because of its size. Users believe it to be far too big for the power it offers.

It’s well suited for average and small rooms, and it has a remote control and a timer which you can program. Unfortunately, it’s not equipped with a sleep-mode option and, most importantly, it’s not very energy efficient. For example, say your average use over a three-month period is of 8 hours per day. Then you will have to pay some $113.18, which is quite high compared with other units we have on this list. 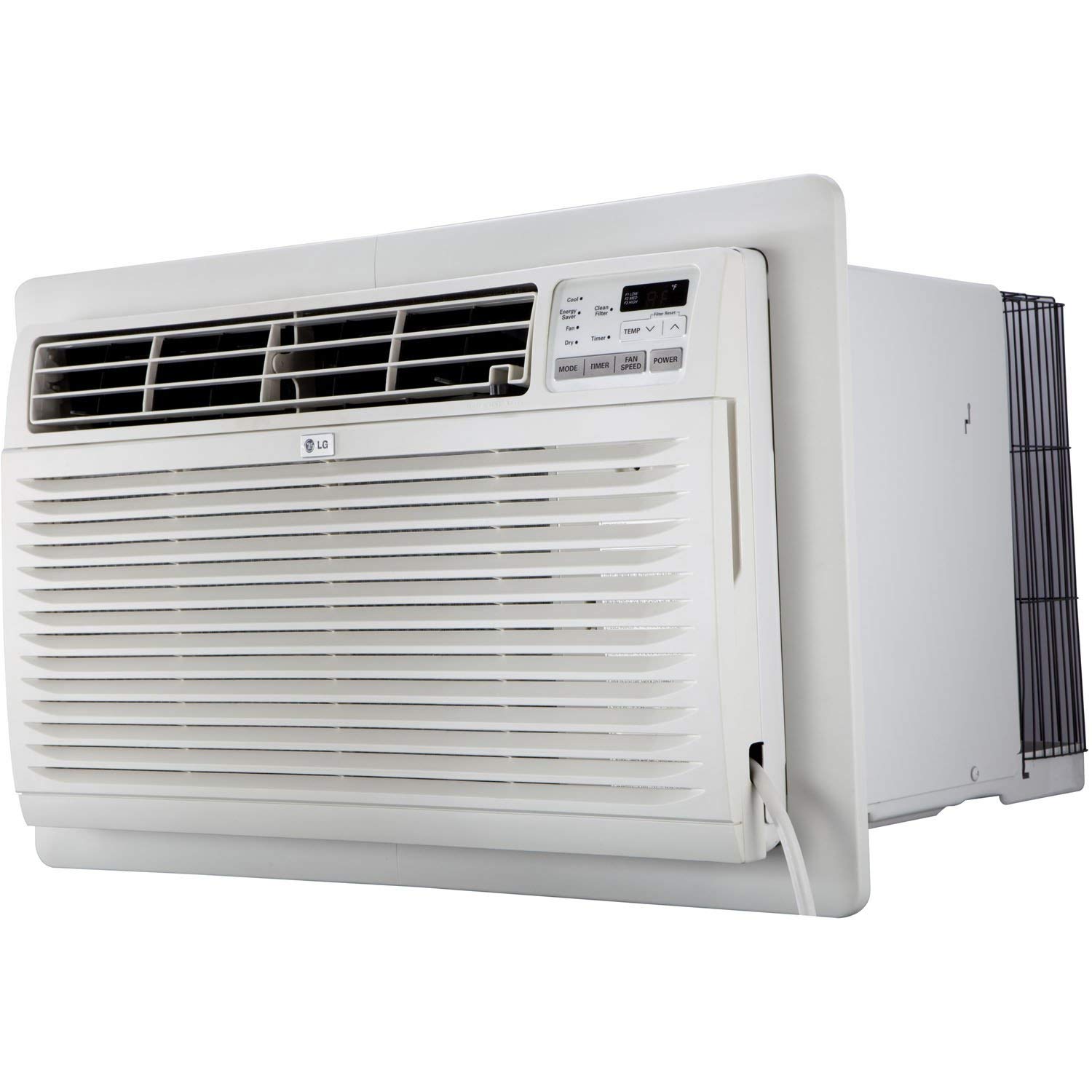 It’s quite big and heavy, weighing about 80 pounds, but it’s great for removing moisture from the air, should you live in a humid climate. Also, the LG LT123CNR retails at about $1 150.

This one retails for approximately $600, and it received a 7.93/10 from users and reviewers. It was designed for large rooms and it really does fulfill its purpose, because it manages to cool them off easily and very efficiently. It has a moderate BTU capacity of 11 500. This means that the size of the room it needs to cool can go up to 700 square feet. Also, its 310 cubic feet per minute air-flow capacity means it will cool a room that large quickly enough.

Its energy-efficiency ratio is of 9.8, which puts it at number two on our list from this point of view. The estimated annual energy cost for this through the wall ac unit is $101.09, better than most products. Apart from that, it’s ENERGY STAR qualified. 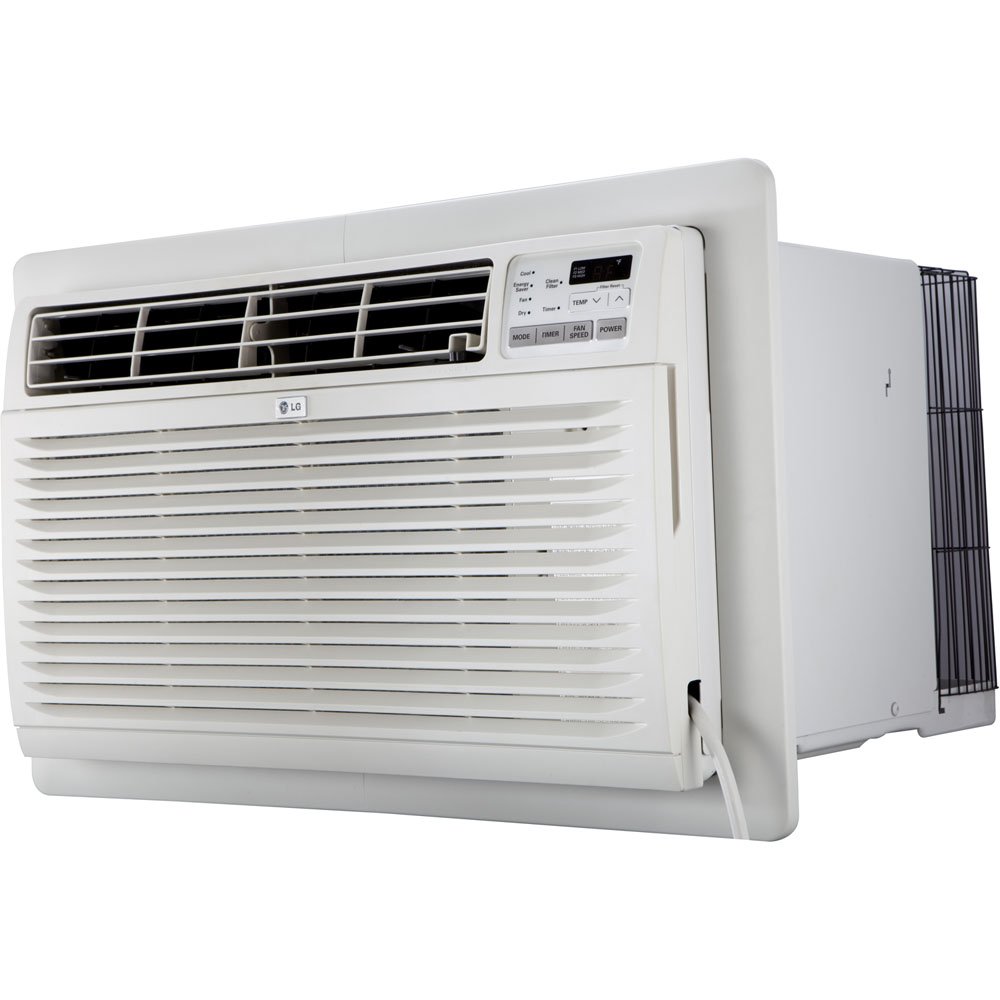 As far as size goes, it’s quite small, coming in at 14-13/32 inches tall, 20-3/32 inches long and 24 inches wide and weighing 80 pounds. However, you should know that it doesn’t have a sleep-mode or an auto-mode function, which is why it’s placed almost at the bottom of the list.

The Impecca received a 7.98/10 from users and reviewers alike, and it retails for $500. Its primary quality is that it has an impressive BTU power for heating, cooling, and fan speed options. It comes to some staggering 14 000 BTUs for cooling and 10 600 BTUs for heating a 700 square foot room. Also, it can eliminate up to 2.9 pints of moisture per hour. 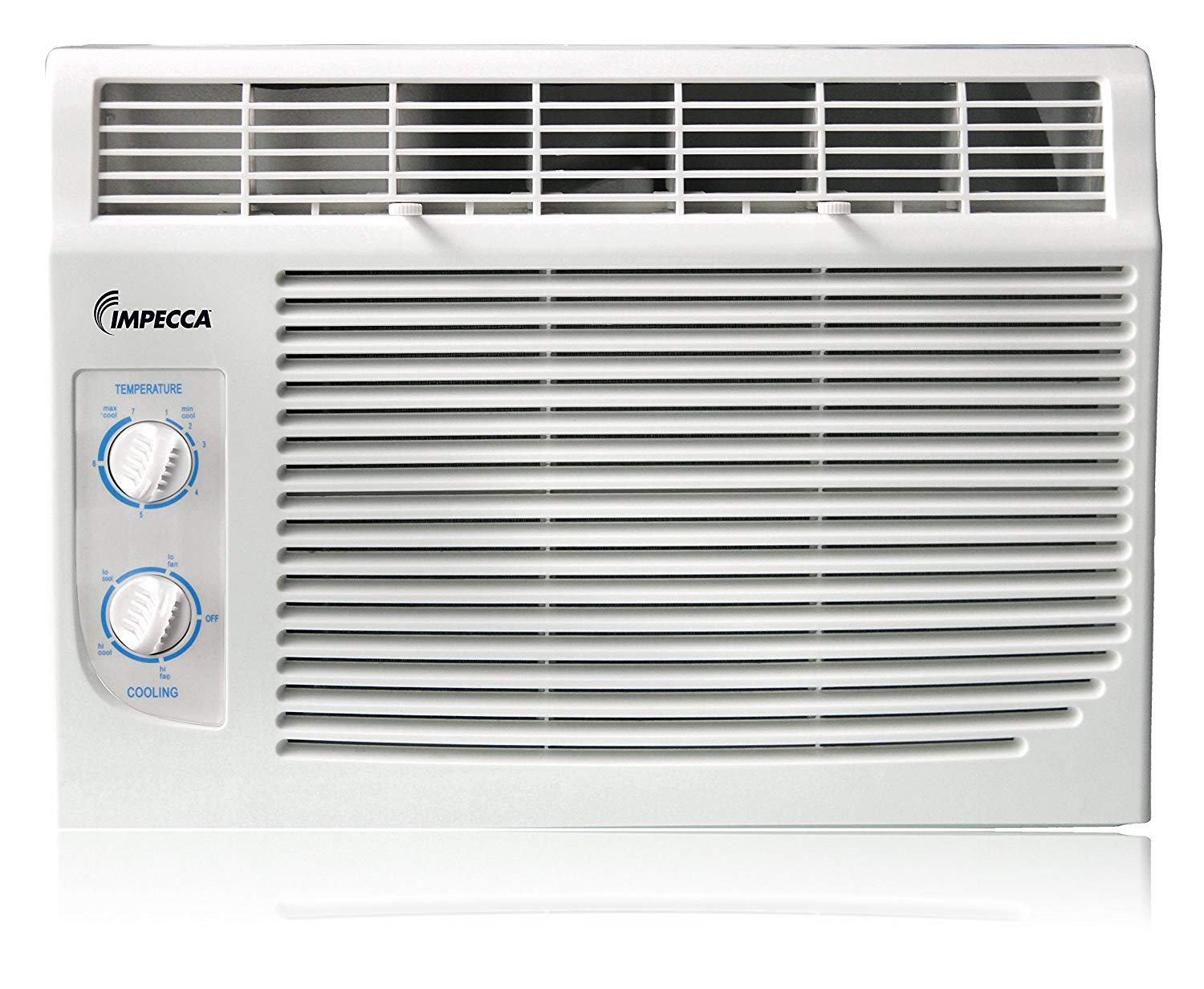 Its energy efficiency rating goes up to 8.5, but it’s still one of the lowest on this list. Even if it is ENERGY STAR certified, it will still cost you some $142.56 per three months to run it. On the cons side, the Impecca comes with many acccessories and features, one of them being the remote control. It also has a programmable 24-hour timer and an auto-mode feature which allow you to run it as efficiently as possible.

Another great thing about it is that it goes beyond heating and cooling. It also has the option of circulating the air without refrigerating it, should you consider it’s not hot enough to use the ac. Apart from that, this unit allows you to use only its dehumidifying mode, separate from the ac itself.

It costs approximately $700, and it received an 8.4/10. Its BTU power is quite median, as the unit offers 10 400 BTUs. These are sufficient to cool a 425 square foot room. It has a moisture-removal feature that can remove up to 2.7 pints per hour in said room. One of its main pros is that it works on R-410a refrigerant. It’s known to be a lot friendlier to the environment than some older refrigerants, such as R-22. 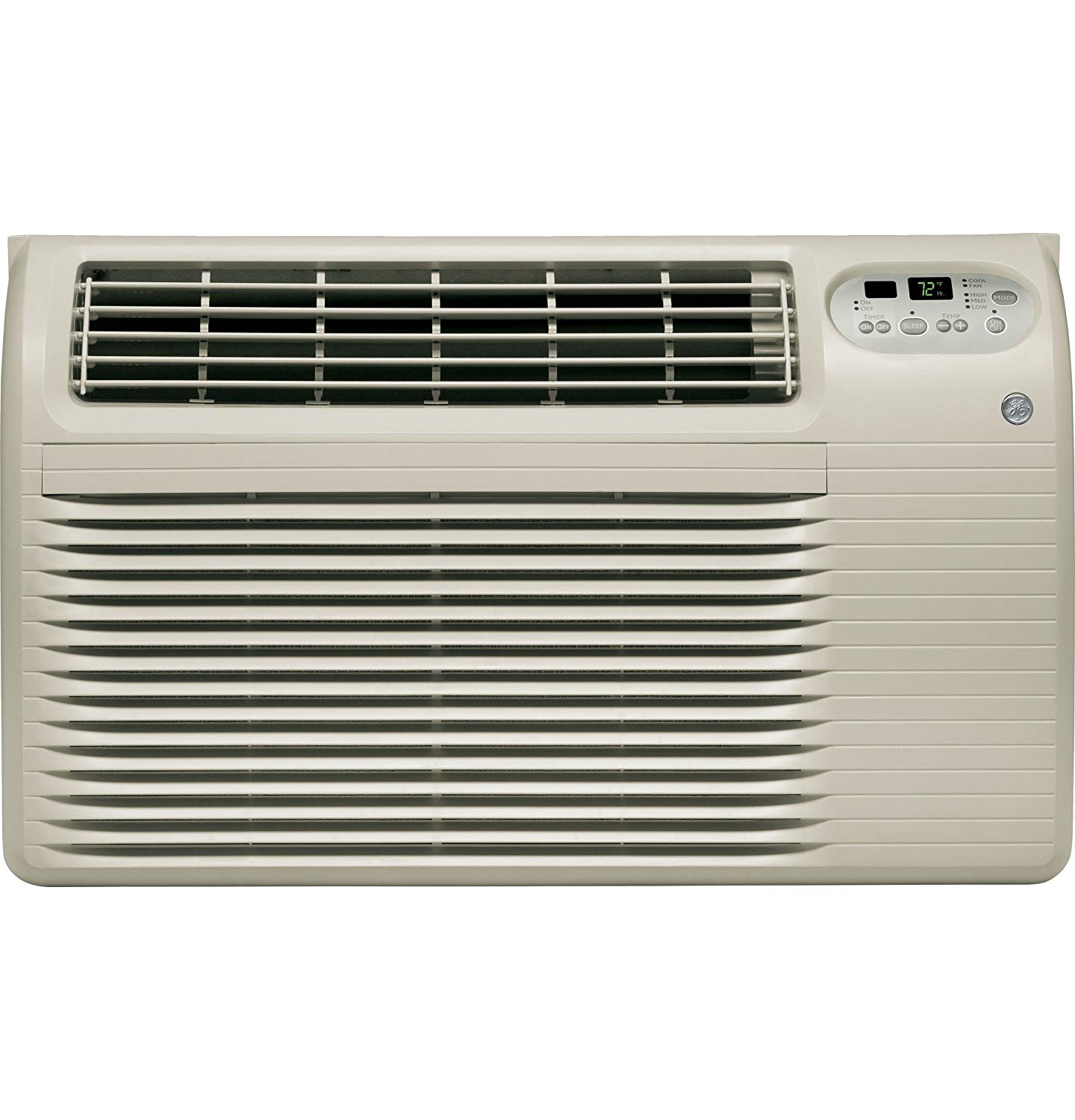 As far as cost and energy-effectiveness go, the GE AJCQ10ACF is one of the best on the list. It has two certifications, one from ENERGY STAR and the other from AHAM (The Association of Home Appliance Manufacturers). Its energy-efficiency ratio is a whopping 9.8.

Another GE model is the AJCQ12ACF. It retails for $711, and it received an 8.4/10 from users and reviewers alike. It was designed for medium rooms of about 550 square feet, so it offers some 12 000 BTUs. It uses the R-410A refrigerant, which is known to be environmentally-friendly. As far as humidity goes, this ac is among the best. It’s actually able to remove some 3.4 pints of moisture from the air. But, it lacks the ability to use the dehumidifier separately from the ac, so you need to run them both at once. 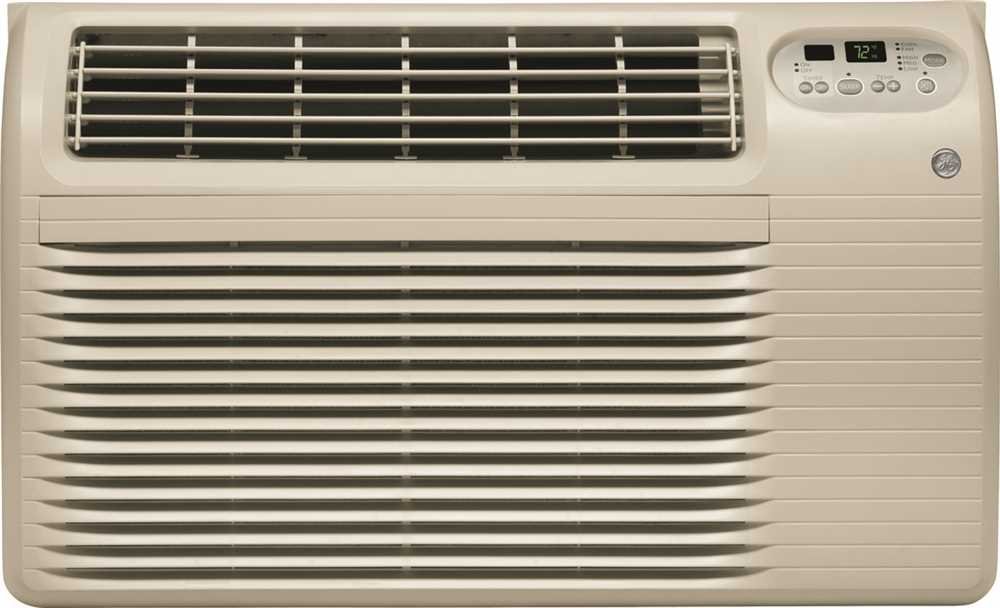 Its estimated annual cost goes up to $105.41 for three months. It received its certification from both ENERGY STAR and AHAM. Also, it’s UL listed. This translates into the fact that it has passed public safety standards. Its energy-efficiency ratio goes up to 9.8.

The Frigidaire through the wall unit costs approximately $620, and it received an 8.68/10. It too was designed for medium rooms, which means it brings some 12 000 BTUs to the table that can cool down a 550 square foot room easily enough. In a humid climate, it removes up to 3.3 pints of moisture from the air in the space of an hour. 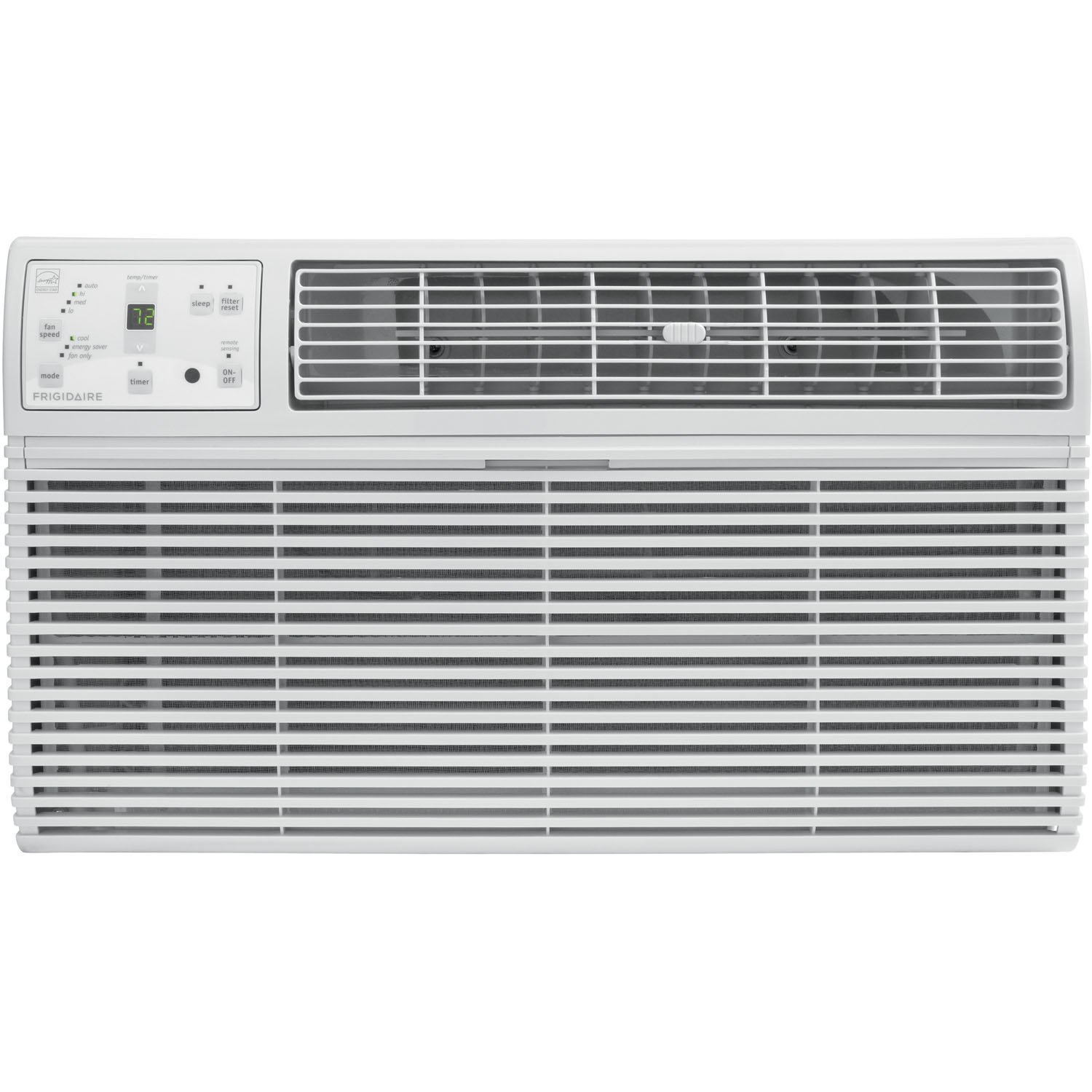 Its energy-efficiency rate is high – 9.8, it costs a little over $100 to keep it running for three months, and it received its certification from ENERGY STAR. It has an auto-restart function which allows it to turn itself back on after a power shortage. It’s quite small and only weighs 72 pounds. Another great pro for the Frigidaire is that its filter is made of antibacterial mesh and is very easy to clean.

We have now reached the best three through-the-wall air conditioners of 2016. Third place goes to the Friedrich Uni-Fit US12D10B. It retails for about $690, and it received an 8.68/10.

For its cooling abilities, users and reviewers awarded it 8.1/10. It packs some 11 500 cooling BTUs, enough to cool down a 550 square foot room. This means it’s perfect for people living in apartments. Its humidity removal feature is quite impressive as well, the unit being able to remove 3.8 pints per hour. But, again, just like with other units, you can only run the dehumidifier along with the cooling mode. 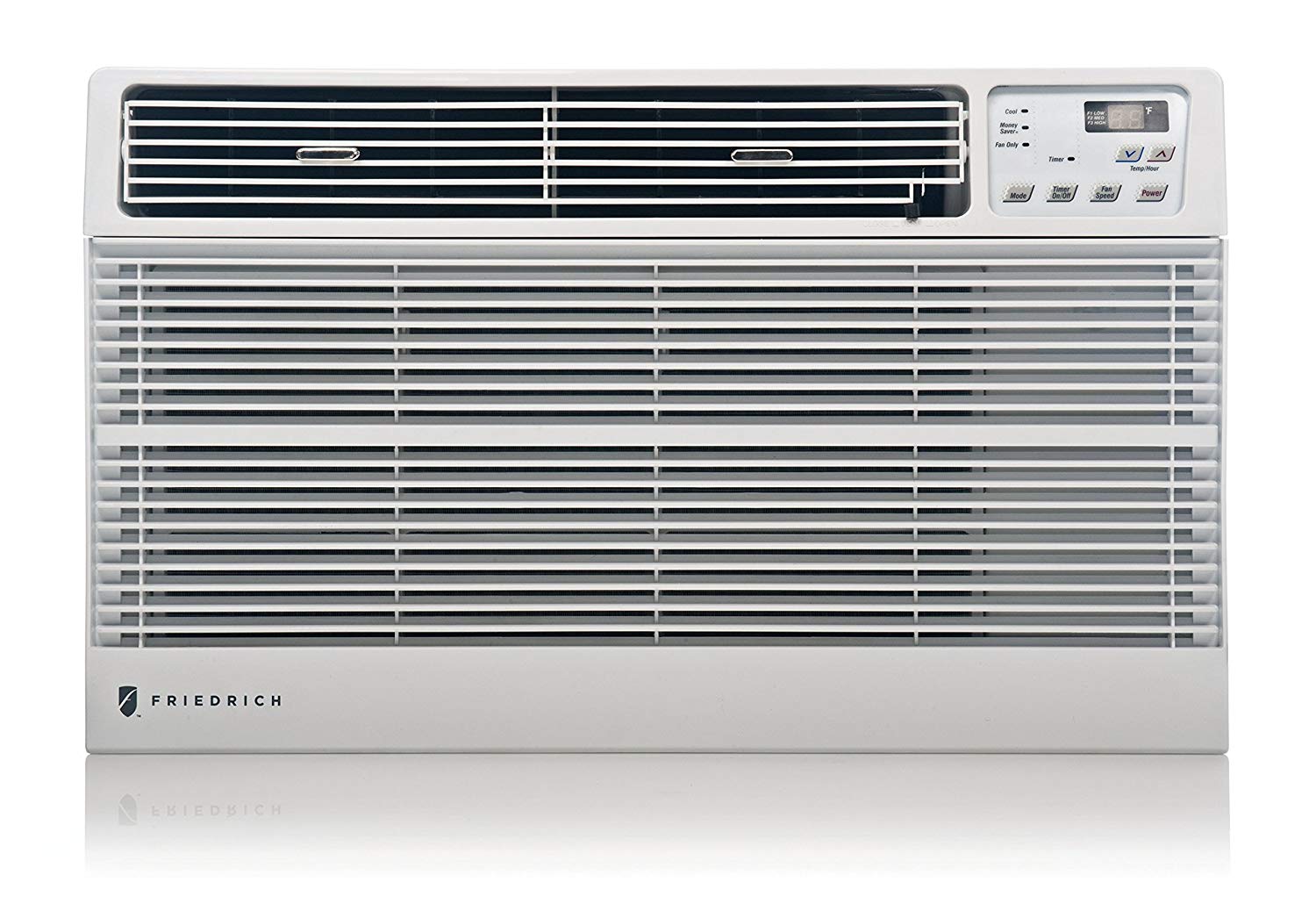 For efficiency, it received a whopping 10/10 and for ease of use – 6.3/10. It also has a great design which users loved because it has six-way directional air louvers while most units have only four.

It retails at $635, and it was awarded an 8.73/10. It’s worthy of the silver medal mostly because of its energy saving features. Its energy-efficiency ratio climbs to a satisfying 9.8, as it will cost you approximately $105 to run it 8 hours a day for three months. The unit is ENERGY STAR approved, and it made it onto UL’s list as a public-safe appliance. 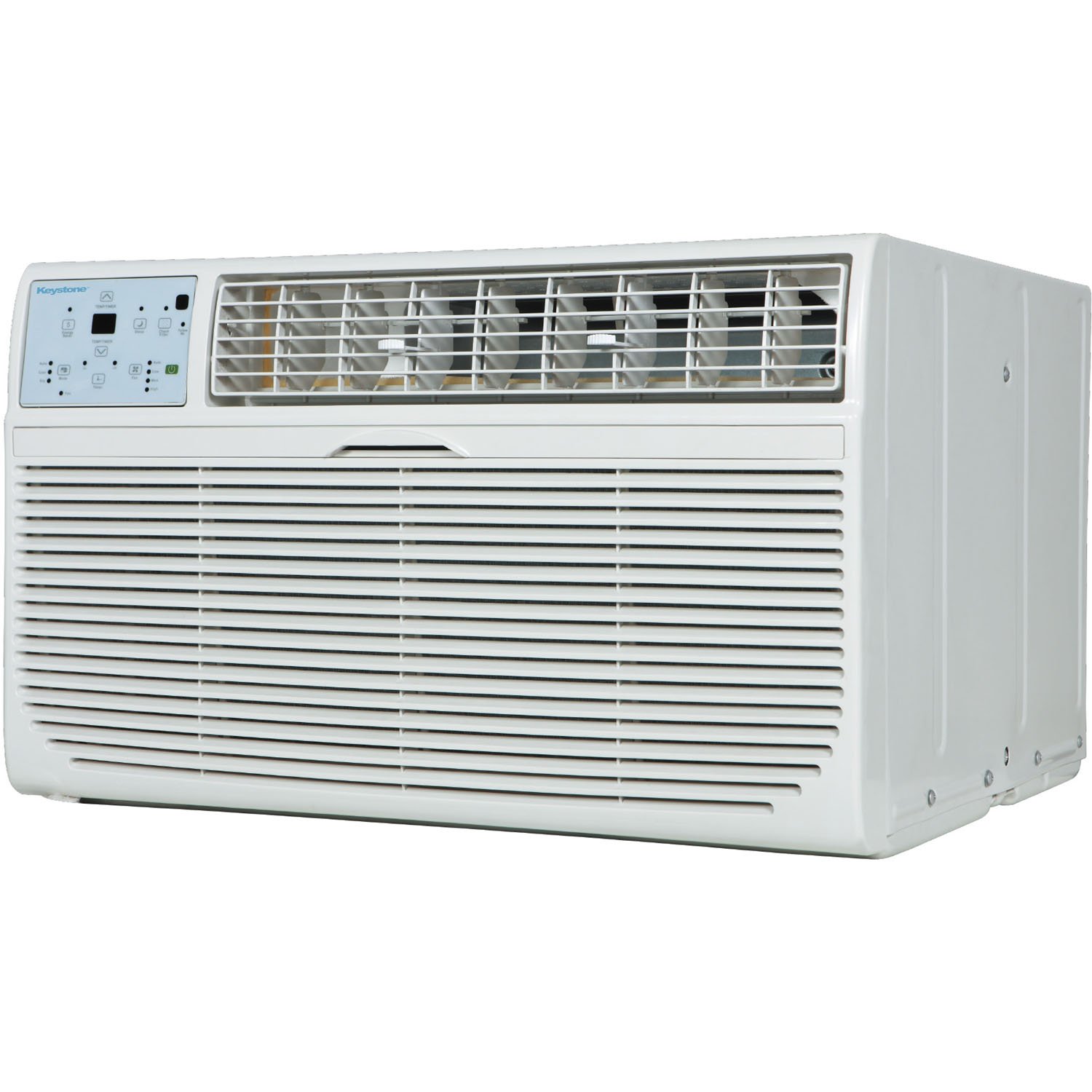 It also has quite a few features that will prove highly convenient for the every-day user. It has a remote control which will give you more freedom in operating it and an auto-restart function in case there’s a power-outage, and you forget to turn it back on or you are not at home when it happens. Apart from that, it also has and energy-saver mode, a sleep mode, and a programmable timer.

The Kenmore 70151 takes home the gold medal for being the best through the wall air conditioner with heat of 2016. It costs $500, and users say you will love it. It’s very effective when installed in large rooms of up to 900 square feet, seeing as it has 15 000 cooling BTUs. Its maximum air flow of 362 cubic feet per minute makes it the most powerful unit on the list. However, take into consideration that, if you have a small room that needs ac, you might be better off with a slightly less powerful unit. The Kenmore might freeze up the space. 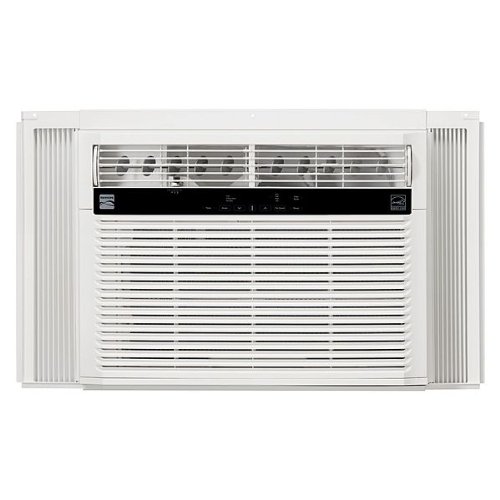 It has energy-efficiency ratio of 10.7, the highest on the list as well. The average cost of running this beautiful appliance for three months 8 hours a day is just $121. It has a remote control that manages all its features, a programmable timer, and a very sensitive sleep-mode. Another great thing about it is that it has a fan-only option. This means you can create a breeze without turning on the compressor. You will truly appreciate this feature at nighttime, in the spring, and autumn.

Installing a through the wall air conditioner

After you have decided which of the above 9 through the wall air conditioner systems is best for you, you need to install it. You have two options – calling in a specialist or doing it yourself. In case you have picked the latter, here are the quick steps you need to follow.

Here are the top 9 through the wall air conditioner systems of 2016. Before deciding which one to purchase, make sure you carefully read all the details regarding it. As shown above, the shopping choice very much depends on the requirements of the room you’re planning on putting it in. Even so, you can’t really go wrong if you thoroughly read our guide!