buildings. Since 2006, McQuay has been a subsidiary of Daikin Industries, Ltd. McQuay world headquarters are located in Minneapolis, MN, USA. Products are sold by a global network of sales representatives and distributors.
McQuay was incorporated in 1933 with manufacturing and headquarters in Minneapolis, Minnesota. Initial success was built on the first classroom unit ventilator and the first hermetic compressor for air conditioning use. During 1941-1945, McQuay manufacturing facilities were converted to support the U.S. war effort. In the later 1940s and 1950s, McQuay products and sales grew as the demand for commercial air conditioning increased. The U. S. manufacturing facilities were expanded to meet this demand.
McQuay became a multi-national corporation during the 1960s by beginning overseas sales and licensing operations in Canada, England, Scotland, and Australia. In 1965, McQuay established a new division in Italy, McQuay Europa, to manufacture 50 Hz equipment.
Through mergers and acquisition in the 1970s, ‘80s, and ‘90s, the McQuay product line grew to include more types of commercial HVAC and large capacity equipment, as air conditioning became viewed more as a requirement than a luxury in buildings of all types. In 1984 it was acquired by Snyder General.
In 1992 McQuay, received the Stratospheric Ozone Protection Award from the U.S. Environmental Protection Agency in recognition of McQuay being the first to design and manufacture chillers with HFC-134a, a refrigerant with no ozone depletion potential.
In 2006 McQuay, was acquired by Daikin Industries, a global manufacturer of both commercial and residential air conditioning equipment based in Osaka, Japan. Daikin had annual sales of $13 billion in 2009. Daikin was named one of the 100 most sustainable corporations for three years in a row by Corporate Knights, Inc., from 2007 through 2009. As a Daikin Industries group company, McQuay is part of the largest HVACR Company in the world.
With more than six million square feet of manufacturing facilities and offices in more than 75 countries, they are uniquely positioned to make sure their products and services are always within Customers’ reach.

Hermetically Sealed Compressors used in refrigeration systems are often described as being hermetic, open or semi-hermetic, to describe how the compressor and motor drive are situated in relation to the gas or vapor being compressed. In hermetic compressors, the compressor and motor driving the compressor are integrated, and operate within the pressurized gas envelope of the system. The motor is designed to operate in, and be cooled by, the refrigerant gas being compressed. The hermetic uses a one-piece welded steel casing that cannot be opened for repair; if the hermetic fails it is simply replaced with an entire new unit. 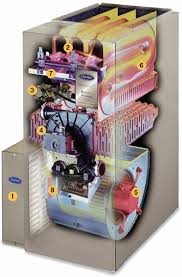 High-efficiency furnaces provide exceptional value, and can be used with natural gas or converted to propane. In addition, the furnace also works with your outdoor system to circulate cool air in summer, helping you stay comfortable all year long.

95% AFUE furnaces save home owners cash in the long run, even without the tax credit. “Simply place, with a 95% AFUE furnace, for every dollar you commit on heating power, 95 cents of that dollar is utilized to warm your residence. 95% AFUE furnaces with a variable-speed blower are even a lot more effective. The variable-speed blowers used in the 95% AFUE Variable-Speed Furnace usually need up to 75 % less electricity than a common motor. Due to the fact a furnace’s blower also operates with the home’s cooling method to circulate air, customers encounter elevated efficiency year-round.
The condensing furnace is so efficient and extracts so much heat from the combustion process that its exhaust vent / flue is just warm to the touch, not “burn your fingers hot” like a conventional furnace. The primary difference between the conventional furnace and the 95% furnace is in the dual heat exchangers.
High-efficiency furnaces feature a second combustion chamber, which captures exhaust gases and moisture before it exits into the flue. This second chamber condenses the gaseous by-products to form a liquid, and then extracts any remaining heat. This heat is then transferred into a second heat exchanger, which supplements the primary heat exchanger and helps to heat the air. The small amount of remaining waste is exhausted from the home through a small flue or even a simple pipe in the wall.
Anatomy of a High Efficiency Condensing Furnace

Furnace Efficiency Ratings
The existing furnace in your home, or maybe one you are considering purchasing, can be organized into these efficiency categories.
• Low Efficiency Furnace: 55% to 72% AFUE
• Low Efficiency Furnace: 78% AFUE
• Standard / Mid Efficiency Gas Furnace: 80% to 83% AFUE
• High Efficiency Gas Furnace: 90% to 98% AFUE
The metric used to measure furnace efficiency is called the AFUE rating. AFUE is an acronym for Annual Fuel Utilization Efficiency and it measures the amount of fuel converted to heat in the space in proportion to the amount of fuel which enters the furnace. The higher the AFUE the more efficient the furnace is.
Homes today are required to have an AFUE rating of at least 78% but furnaces of this low AFUE are typically found in manufactured homes. For a furnace to meet the DOE’s Energy Star program, it must be a high efficiency furnace with an AFUE of 90% or higher.

Video shows you steps to take at your furnace if you smell gas. Please watch then call a professional technican or your utility company.