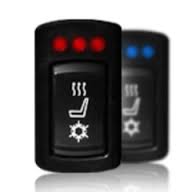 Air Conditioned Seats
A standard model for air-conditioned seats, developed by scientists at the Department of Energy’s National Renewable Energy Laboratory (NREL), works like this: The fabric of the car seat is a porous mesh, so air can flow through it. Multiple fans inside the seat produce air circulation, which blows through a diffusion layer that spreads the cooling effect throughout the seat and outward through the mesh, cooling the surface. This air may or may not be refrigerated. The porous covering of an air-conditioned seat allows your body’s natural cooling system to work even when sitting down and keeps you cool by circulating air across your skin. The moving air carries your body’s heat away.
But some air-conditioned car seats also use a cooling element. Like most air conditioners, these work on a compression, condensation, expansion cycle. Air conditioning operates on a very simple principle: When a gas referred to as a refrigerant is compressed, it becomes warmer and when it expands it becomes cooler. This principle can be used to remove the heat from a room, a car, or even a car seat and carry it elsewhere. Until recently, the gas most commonly used as a refrigerant in air conditioning systems was Freon, the commercial name for a chlorofluorocarbon (CFC) manufactured by DuPont. These CFCs have been found to be destructive to the Earth’s atmosphere. Freon has been largely replaced in automobile air conditioners by the hydro fluorocarbon HFC-134a.
A 2005 government study estimated that air conditioner use decreased a car’s fuel efficiency by 21 to 24 percent and could increase automotive carbon emissions by as much as 120 percent over normal levels. Every time you turn on your car’s air conditioner, you’re costing yourself more money and releasing damaging pollutants into the environment. Yes, there are times when air conditioning is absolutely essential. 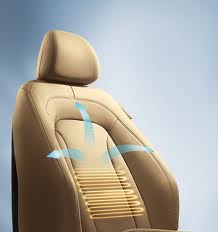 One alternative now offered by several auto manufacturers is air-conditioned seats. By confining the cooled air directly to the spot where the hot driver (or passenger) is sitting, air-conditioned seats use energy more efficiently than air conditioners that cool the entire interior of the car. They don’t completely eliminate fuel use and pollution, but they minimize it. And air-conditioned seats offer some important advantages over ordinary air conditioners. In cars where the seat air conditioning can be remotely activated, they eliminate the searing burn sitting on superheated, sun-warmed upholstery when you first climb in the car. They also allow both driver and passenger to fine tune the air conditioning to their own needs, and can protect your clothes from embarrassing sweat stains.

The seats come in the form of perforated car seat covers with special cushions. The cool air is passed through the perforations by running motors. Depending upon the individual car manufacturer, the air conditioning mechanism differs to some extent. Some cars simply blow uncooled air through the perforations to achieve an air conditioning effect. Whereas some cars that come with a special cooling element, actually help you to sit on cooler seats. The latter version costs more.

The air conditioning facility is available for the back as well as bottom of the seat. Some cars come with a climate control setting for car seat air conditioners. Besides, some of them even offer individual settings. Meaning, you can set the control of the seat at a desired temperature and save your setting. Family members can also set their respective settings. The next time you sit in the car, you simply have to push your individual setting, instead of fumbling with the numerous controls.

Heated Seats
Heated seats were invented by. Robert Ballard. of General Motors in 1951, and the patent was issued in 1955. The actual technology behind heated seats, however, is no different than that used in electric blankets, hair dryers, water heaters and anything else that uses electricity to produce heat. Heated seats are powered by a heating element, a long strip of material that functions as a resistor. A resistor resists the flow of electricity. When electric current flows through it, the energy is turned into heat, which flows through the seat, warming the rider.

The heated seats are controlled by a type of switch called a relay. A relay allows a small electric current to control a much larger one. When you flip the switch, to turn on the seat heater a small current flows through a coil in the relay. Near this coil is an open switch. When current flows through the coil, it creates a magnetic field, which pulls the switch closed. This completes a circuit, sending electricity from the battery to the seat cushion heating element. The audible click you can hear in some cars when you turn on the seat heater is the relay closing.