Lennox International Inc. is a global leader in the heating, air conditioning, and refrigeration markets. Its stock is traded on the New York Stock Exchange under the symbol “LII.”

Lennox Original Buyout of Service Experts
Lennox bought Service Experts for $157 million in June of 2000. The purchase gave Lennox an additional $600 million in sales which, added to the estimated $400 million volume which put it at about $1 billion. This acquisition made them the largest residential dealer in the country, with nearly 200 retail outlets. The acquisition ends the three-year life of Service Experts one of four nationally consolidated and publicly traded contractors that sprang up in 1996-97. Service Experts’ stock soared to $35 after opening at $13. However, 18 months after its formation, the contractor’s stock price eroded, and last week it was trading at the $7 range. The company’s 1999 sales were report to be in the $450 million range.
Since its formation, Service Experts acquired more than 300 dealers using a combination of cash and equity. Many of the acquired contractors were members of the Contractor Success Group (CSG). At the time of its sale, Service Experts had 120 service centers in 36 states.
American Capital, Ltd The Buyer

On March 25, 2013, American Capital, Ltd. announced its buyout of Service Experts, a leading provider of sales, installation, maintenance and repair of HVAC systems for the residential and light commercial markets. American Capital’s investment took the form of preferred and common equity and a revolving credit facility.
Service Experts investment provides AC with a solid opportunity to partner with an industry veteran to strengthen a company with a large installed infrastructure ready for growth. AC has a very talented management team with tremendous industry expertise that is focused on driving value creation. American Capital’s complete financing package and operational support make them an ideal owner for Service Experts,” said Scott J. Boxer, newly appointed President and CEO of Service Experts.
American Capital, Ltd. is a publicly traded private equity firm and global asset manager. American Capital, both directly and through its asset management business, originates, underwrites and manages investments in middle market private equity, leveraged finance, real estate and structured products.
American Capital’s complete financing package and operational support make them an ideal owner for Service Experts,” said Scott J. Boxer, newly appointed President and CEO of Service Experts. Mr. Boxer is an internationally recognized leader in the HVAC industry with a three-decade track record of successfully leading businesses through transformations and growth initiatives. After 40 years in the industry, Mr. Boxer retired from Lennox International, Inc. in 2010, where he had spent a decade-long tenure in various executive positions, including President and Chief Operating Officer of Service Experts from 2003 to 2010.
Consolidation of HVAC Contractors
The Mechanical Service Contractors of America organization has expressed concerns about the merger trend in the United States heating, ventilation and air conditioning industries (HVAC). They have express a concern of the pros and cons of consolidation; Skepticism over claims about the size of the HVAC market; and Skepticism over statement that a fragmented industry can be improved by mergers.
Background: The 1990s brought consolidation and excitement to the industry with companies such as Service Experts, GroupMac, and American Residential Services (ARS) to name a few. These companies paid multiples of earnings for prime contracting companies, and the world of HVAC began consolidation.
The first HVAC service consolidators were small groups of contractors who decided to put their companies together, sell some stock, and cash in some of their hard-earned chips. The initial sale of stock for cash was great for the original company owners, but things soon began deteriorating. Some consolidators changed the scope of business by focusing on growth through acquisition. This way they could continue to show Wall Street good revenue and profit numbers. But they needed more cash to keep everything going. When the cash dried up, the acquisitions began offering stock rather than cash for newly acquired companies.
Things seemed to be going OK at first. Then the bottom dropped when Wall Street figured out that growth and fat balance sheets were occurring mostly due to acquisition, not profitability. The largest problems for the consolidators were they didn’t have plans for increasing market share, sales volume, and profitability.
A number of the consolidators of the companies eliminated the reason the companies were successful in the first place: their independent spirit and ability to be flexible. And too, their ability to adapt. There have been successes. Many locations have done well, growing steadily and showing a respectable profit.
Since consolidation’s start, there have been many changes: Service Experts was purchased by Lennox International Inc., and the entity represented a huge part of that company’s earnings and now Lennox has sold them; GroupMac became Encompass, and then they were gone; and ARS became ARS Service ExpressÂ®, a ServiceMaster brand.

If you have one or two rooms you need to cool in the summer a window air conditioner can be more economical choice than a central air conditioning unit. It also will cost you less both initially and over time.
Most room air conditioners sit in a window where they can exhaust warm air to the outside. Room air conditioners can also be built into the wall for a more permanent installation.
Selecting Window Unit Size
When you select a room air conditioner, size is the most important feature you should consider. If the unit is too small it will run continually without cooling the room. But, if you buy a unit that’s too large for the space, it will be less effective than one that’s the correct size.
Air conditioners work by removing both heat and humidity. Humidity condenses from the air when it passes over the air conditioner’s cooling coils. So a unit that is too big will cool the room so quickly that it won’t have the opportunity to remove as much humidity from the air. The unit keeps turning off and on and the room is damp, clammy and not very comfortable. A properly sized unit removes humidity as it cools.
Also a larger unit costs more and uses additional energy. When you run a smaller unit for a longer period of time it uses less energy to cool a room than running a larger unit for a shorter time.    The cooling capacity of room air conditioners is measured in BTUs, or British Thermal Units, per hour. To figure the size unit you need, measure the space you’re trying to cool. To estimate square footage, multiply the length of the room by the width. A room that’s 10 feet by 20 feet, for example, has 200 square feet in it. It is recommended that the air conditioner for that sized space is rated at 6,000 BTUs. Here are some examples of recommended air conditioners for square footage:
To Cool An Area Recommended Size Window Air Conditioner
150 to 250 square feet 6,000 BTUs
250 to 300 square feet 7,000 BTUs
300 to 350 square feet 8,000 BTUs
350 to 400 square feet 9,000 BTUs
400 to 450 square feet 10,000 BTUs
450 to 550 square feet 12,000 BTUs
550 to 700 square feet 14,000 BTUs
Eco-friendlier A/Cs

Air conditioners made in 2010 must use a refrigerant that is more ozone friendly. Most makers have switched to R-410A. Performance isn’t affected in any of the new models. Check the units and look for the newer models using the new refrigerant.
Save Energy and Money
The newer models claim to use at least 10 percent less energy than standard models and about 25 percent less juice than models made a decade ago. You can save on energy costs by using the timer to turn on the A/C just before you arrive home. Don’t lower the set temperature as soon as you turn on the unit. It doesn’t cool the room faster, and it will use more energy. A higher fan speed also uses more energy but not much. To keep your unit running efficiently, vacuum, wash, and dry filters monthly or as needed.
System Maintenance
For the cooling or heating seasons it is a good idea to have your system checked out by experts. Small problems can become bigger problems as your system continues to run. Your air window air-conditioning system needs regular maintenance.   There are many makes and models of air conditioning systems and skilled technicians have the know-how to diagnose, adjust or repair your system so that you are comfortable all year long.   All air conditioners have filters that need to be cleaned periodically. For easy maintenance, choose one that has a slide-out filter. Keeping the filter clean saves energy and money.
AC Unit Replacement & Installation
To make sure your window air conditioner has been properly installed you may want an expert to take a look at your home, and help you design and engineer your air conditioning system to meet your needs and budget. Whether you are upgrading the cooling system in your current home, or installing a system in a new home, trust the experts with your cooling needs.

All of the 35 window air conditioners Consumer Reports tested they found that even a $99 unit proved excellent at cooling. But some less expensive models might make you lose your cool because they’re noisy or don’t work well on the hottest days and nights. 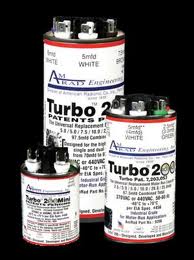 dual run capacitors from AmRad Engineering , Palm Coast Florida. Simply put,  just one Turbo 200 capacitor replaces more than 200 individual capacitors! Think of the inventory  you can eliminate, it’s a no brainer. They also make a smaller verzion the Turbo 200 Mini and the Large Turbo 200X  that goes up to 97.5 mfd!  They also manufacture universal start capacitors  as well as a regular line of single and dual capacitors. Our technicians and our customers  love that they’re made right here in the USA!   If all thats not enough to make you rush out and stock your trucks with them,  they also come with an industry leading  5-year warranty.  They’re not inexpensive but they are high quality parts. Who among us doesn’t mind being known for using top shelf american made parts. What’s it worth to not have a callback in less than a year to replace the cheapo two dollar Chinese capacitor you thought was a good deal. Even if you don’t use the Turbos try out their regular caps we have had great success with these quality parts. It’s pretty impressive when you can offer a five year parts warranty on your invoice.  Check  them out at this link.