If you drive an RV in the summer you know the heat can be a problem. The built in HVAC for the cab does not seem to be strong enough to cool the entire RV, so when you’re driving in extreme heat it may be necessary to run the generator to power the living area A/C to cool down the RV. There may be times in the summer that is may be necessary to have two A/C units running to cool RV (cab and living area AC).
To rapidly cool the living area on hot days try closing all the vents in the bedroom, opening the vents on the front A/C along with all the vents in the living area, shut the door to the back area of the RV and turn up both A/C units. Having the rear vents closed forces most of the cold air into the front part of the RV and helps cool it down.
Recreational vehicles normally have an air conditioner vents located on the rooftop. The location of the air conditioner means excellent cooling power and it can work well even when you are driving on the highway. Air conditioners in RV's work like a typical refrigerator does. It does not cool the room down, instead it removes the heat. It takes the heat from the RV and dispose of it outside.
Parts of the Air Conditioner
An air conditioner has eight main parts: a compressor, condenser, evaporator, wires that
connect the parts together, an air moving system, a fan to push the air over the
condenser and another fan to push air over the evaporator. It also contains liquid for
cooling.

The RV’s AC compressor performs the job of circulating the Freon through the condenser and evaporator coils cooling fins and the cycle is repeated as the thermostat setting determines it necessary. Both the compressor and the fan motor use capacitors to provide a high voltage charge to get them moving and a lesser charge to keep them running. Only one capacitor is usually used for both fan and compressor. It the capacitor goes bad, neither the fan nor the compressor will start.
Energy Source
The air conditioner runs on what is known as AC power. The AC power is derived from a 120 volt socket that is plugged into a generator or a home. A gas generator burns a gallon of gas every hour and may be costly. It is a wise idea to use another power source such as a home or a generator that does not use gasoline.

The Compressor
Compressors condense the refrigerant vapors and heat it up as it condenses it. Then it moves to the condenser where the heat is taken out by the fan. This makes the vapor cool and becomes a liquid. The liquid slides down the capillary tubes and on to the evaporator. The liquid begins to soak up the heat from the air in the RV as it moves along it by the evaporators fan. This makes the liquid expand and when the liquid has soaked up enough of the RV's heat, it becomes a vapor once again. This overly heated vapor is sucked by the suction the compressor creates and the cycle repeats itself.

Propane Cooling Unit
Propane is a liquefied petroleum gas, used in RVs for heating, cooking and refrigeration. It may be called bottle gas, referring to how it is sold and stored. Propane offers the RV owner these advantages:
1. Liquid propane is more readily available than gas in a power outage as gas stations may also lose power causing the pumps from working.
2. Liquid propane can be stored indefinitely whereas gasoline tends to go off after a few months.
3. Liquid propane is a clean burning fuel and the propane generator produces less emissions than a gasoline or diesel powered generator.
(LP Gas - Propane; abbreviation for liquefied petroleum gas, which is a gas liquefied by compression, consisting of flammable hydrocarbons and obtained as a by-product from the refining of petroleum or natural gas. It is also called bottled gas, LPG (liquid petroleum gas) and CPG (compressed petroleum gas).
Natural Gas Cooling Unit
A gas cooling unit uses ammonia as the coolant, and water, ammonia and hydrogen gas to create a continuous cycle for the ammonia.
It works like this:
Heat is applied to the ammonia and water solution in the generator. As the mixture reaches the boiling point of ammonia, it flows into the separator. Ammonia gas flows upward into the condenser, dissipates heat and converts back to a liquid. The liquid ammonia makes its way to the evaporator where it mixes with hydrogen gas and evaporates, producing cold temperatures. The ammonia and hydrogen gases flow to the absorber where the water collected in the separator in step No. 2 mixes with the ammonia and hydrogen gases. The ammonia forms a solution with the water and releases the hydrogen gas, which flows back to the evaporator. The ammonia and water solution flows toward the generator to repeat the cycle. 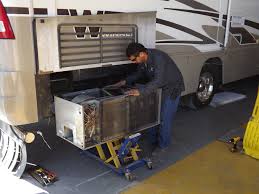