The price of the fuel that’s used to heat many north Iowa and southern homes has reached nearly $5 per gallon, and it’s leaving some people wondering how they’ll pay for their LP and many of them are now turning to local lawmakers. Some 14 million households use the liquefied gas to heat homes, especially in upper Midwestern states such as Michigan and Ohio, where the shortages have had the most impact.

The shortage has been blamed on a combination of a wet harvest and an extremely cold January but many people question that, saying he believes there’s more to the story. The U.S. has exported so much LP to Europe that Europe is actually sending us ships back to the East coast full of LP because the European reserves on LP are full.
In addition to the weather, inventories have also been stretched by short-term logistical problems and a long-term shift toward exporting more liquefied petroleum gas (LPG), production of which has surged due to the shale revolution.
Demand has been boosted by the combination of record freezing weather at the start of this year and a late, wet, record corn harvest last October and November, when large quantities of propane were used to dry out crops. Propane stocks have been drained and prices in the region are the highest since at least 1990. The industry is doing is literally working round the clock to move propane from where it is, in the large storage facility in Texas, using trains and trucks, pipelines and barges to where it is needed.
Prices
Prices have spiked for the fuel that nearly 6 million U.S. households rely on for home heating. Nationwide, propane prices averaged $2.86 per gallon last week, up 17% from the same period a year earlier, according to the U.S. Energy Information Administration. Prices are even higher in some regions. Residential customers in New York State, for example, paid an average of $3.28 a gallon for propane last week, up from under $3 a gallon in December and 20% higher than at this time last year.

Prices are likely to go even higher as another blast of extreme cold weather is expected. Temperatures will be 10 to 25 degrees below average across much of the country. Temperatures below freezing could extend far south. 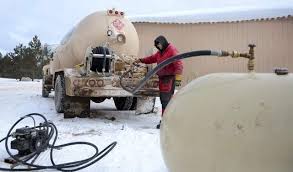