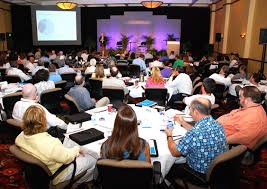 Cold Air in business Meetings do they do that to keep people awake or kill germs?
As summer-clad office workers, conference attendees and event guests stream into meeting rooms and reception halls nationwide, many are met with a blast of Arctic air. “Over-chilling” is one of the top complaints of meeting planners, says Donald Young of the International Facility Management Association.
Meeting planner Steve Kemble of Dallas sees it all the time in the surveys that conference attendee’s mail in. “If two or three weeks later they’re still thinking about the temperature, then that’s an issue.” It’s so frustrating “to plan a fabulous program, with a speaker you paid $100,000 for, and all you hear from people leaving is ‘Brrr, it was freezing in there!’ ”
Folks in charge of thermostats say this: You have to pre-chill so you don’t overheat. “We always make it as cold as possible prior to the event starting, because it’s a better experience,” says Eric Whitson, director of sales at the National Conference Center in Lansdowne, Va. That means about 65 degrees. “At first it’s going to be chilly to most people who enter, but the temperature goes up as those numbers build.” It should end up at about 70 degrees, he says.
“Once it gets too hot, you can’t cool the room down,” says Elise Enloe of Attention to Details in Oviedo, Fla. Chilling is essential because “once you put 500 sweaty bodies in the room, all drinking and dancing and giving off body heat, you can’t do anything about it.”
Engineer’s Response
There’s only one problem with this logic, says Kent Peterson, past president of the American Society of Heating, Refrigerating and Air-Conditioning Engineers: It is wrong. The whole idea of getting a room cold before the people come flies in the face of ASHRAE’s 114 years of experience, Peterson says.
If you have to pre-cool a room, it’s because something’s seriously out of whack with the air-conditioning system, he says. “You should start out at 74 degrees, and as the temperature starts to rise up to 78, the air conditioning system will turn on and keep the temperature down.”
And no excuses about the addition of all those heat-producing bodies. That should have been taken into consideration when the system was designed, he says. “Cooling load calculations” are based on how many people are in the space and what activities they are to be engaged in, whether it’s dancing or sitting. “Our industry is very good at doing these calculations,” he says.
Peterson says many rooms are chilled to dehumidify the air. “Instead of implementing an energy-efficient design that has a dedicated system to dehumidify the outside air, they’re running their air-conditioning system at full load in order to reduce the amount of moisture.”
Keep People Awake
Canadian business speaker Cameron Herold asks for it. Speakers “get all ballrooms set colder during the daytimes (after lunch sessions especially) to keep people awake.”
Meeting planner Debby Goedeke of the Albany County Convention and Visitors Bureau in Albany, N.Y., says clients often ask that ballrooms and meeting rooms be kept colder so that attendees will stay alert. They want their attendees’ cold.
Eric Papp of Tampa-based Generation Y Consulting is in that camp. He speaks about 13 times a month in hotels and likes to have it “a little cold because it keeps people alert.” Cold air does little to kill germs.
Cold Employees
It was found that cold employees weren’t just uncomfortable, they were distracted. When the body’s temperature drops, people expend energy keeping themselves warm, making less energy available for concentration, inspiration, and insight.   Overly air conditioned offices are one of those conundrums many people have to face on a daily basis. It is sweltering outside. Like so hot that the shower you took a half hour ago was pointless and you are contemplating just pouring a bucket of water on yourself before you go to your desk. But then you get inside and it feels great! However, after a little while you realize you have goose bumps all over your arms–and need a sweater. Actually, more like a jacket. And a pair of gloves wouldn’t hurt.
A study found that Cold employees weren’t just uncomfortable, they were distracted. The drop in performance was costing employers 10% more per hour, per employee. And it’s not just performance that dips, our impression of the people around us changes. In a study reported in the journal Science, psychologists uncovered a link between physical and interpersonal warmth. When people feel cold physically, they’re also more likely to perceive others as less generous and caring. They view them as cold.
When people are warm, on the other hand, they let their guard down and view themselves as more similar to those around them. Researchers at UCLA even states that brief exposure to warmer temperatures leads people to report higher job satisfaction. The same area of the brain that lights up when we sense temperature–the insular cortex–is also active when we feel trust and empathy toward another person. When we experience warmth, we experience trust. And vice versa.