To Homeowners, Building Owners and Landlords:

As many of you know R-22 Air Conditioners and heat pumps were no longer manufactured  as of January 1, 2010. Under terms of the Montreal protocol the U.S. agreed to meet certain  obligations by certain dates that will affect the Air Conditioning industry. January 1, 2010 was one such date. As a result HVAC system manufacturers may not produce air conditioners or heat pumps containing R-22.

New installations are now limited to the new refrigerant R-410A.  R-22 containing equipment installations were limited to existing inventory built prior to January 1, 2010. This new law put a lot of  home and building owners alike in a very difficult (and sometimes expensive) situation. Unable to buy just an outdoor unit (condenser)  if theirs failed they were forced into replacing an out of warranty compressor or purchasing an entire new R-410A system.  Although a large number of these systems justifiably needed to be replaced, you lost the option of doing it in stages or “a piece” at a time and were forced into an all or nothing situation. In the down economy many folks could not afford the added expense. The industry saw a dramatic increase in the purchase of window units.

In late 2010 with the leftover inventory of R-22 condensers exhausted one HVAC manufacturer poured over the ruling on the R-22 ban and  found a loophole. Simply put they could build and sell condensing units for R-22 applications, they just couldn’t charge them with R-22 at the factory as was standard practice.  These new “dry units” would be shipped with a holding charge , generally dry nitrogen. The installer would then field charge the unit with R-22, and  all within the letter of the new law.

After retooling their machines and firing up old production lines most, if not all major AC manufacturers began legally producing these “dry  R-22 units”.  Shipments started to hit suppliers docks in early 2011. Several manufacturers are doing a limited production run of these units for a number of reasons but most notable is the fear the loophole will be closed sooner than later. 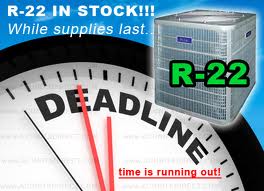 If you’ve been told your old condenser or heat pump is bad,  but your inside coil (evaporator) is still good or recently been replaced but not compatible with the new R-410a refrigerant this news could be of great benefit to you.

If you own rental properties or commercial buildings and complete system replacement is not a viable option this could be a fantastic time to upgrade some old condensers that are on borrowed time.

There are many, many scenarios where this could be beneficial. If  this sounds good to you, don’t delay call your local HVAC contractor and see what your options are. This may indeed be the last chance to purchase  R-22 equipment.  But, on the other hand…