Well  for example in  Oak Cliff, Texas some low life’s decided they wanted the few dollars an elderly women’s air conditioning unit would bring as scrap so they stole it. In the midst of the hottest summer in 31 years!  What’s worse the unit was in a locked protective cage after having had two AC units stolen in previous years. Sadly the poor women died from a heat related illness two days after reporting the theft. If these skunks are ever caught a case could possibly be made for murder, only if.  Today there are copper theft stories in newspapers and police logs from nearly every state in the country.   Now, we always had a certain amount of theft from new construction sites and the like. However, today existing homes as well as commercial buildings and especially churches have become targets of these dirt bags.

The police are helpless unless they can catch them in the act. Some states, Texas in particular has enacted new laws governing the scrap yards and recyclers. One that we visited with had to install a new computer system costing them thousands of dollars. They can now by law only accept air conditioning units from licensed contractors or their agents. A contractor must have his
contractor’s license and driver’s license scanned into the computer system.  A homeowner who has his or her air conditioning unit replaced and wishes to recycle their old one can show the
recycling yard the invoice showing that they purchased a new air conditioner and are therefore allowed to recycle one old one. 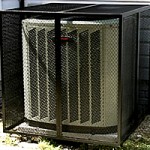 Hopefully other states will take strong measures and enact laws similar to Texas making jail times and punishment more stringent for these types of thefts. Sadly as is always the case someone looking to make a fast illegal buck always seems to cost the average citizens their hard earned money in direct and indirect ways.

The photo below shows what happens to air conditioning units once thieves get their filthy hands on them. 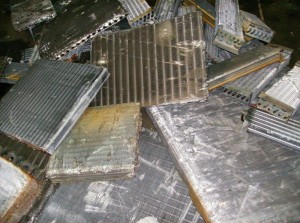