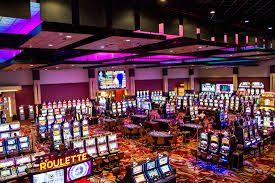 Casinos are one of the few public places that allow indoor smoking. They are faced with a unique air quality challenge. In addition to cigarette smoke, gaming facilities must also control malodors related to customer density, food services and restroom facilities in order to encourage guests to stay and play. In the competitive world of casino gaming, allowing an unfavorable smell to drive players away can be costly to business. Most casino operators don’t realize the amount of paper ash, tar, nicotine, and carcinogens that are emitted into the breathing zone from a single burning cigarette.
Casino Atmosphere
The atmosphere in casinos, with or without smoke, is extremely dirty. The constant flow of people in and out creates a variety of pollutants, including bacteria and virus droplets that are passed on to employees. Dirt, perspiration, cologne, perfume, skin flakes, and other human emissions combine to make unacceptable indoor air quality in most gaming environments.

Use of Chemicals
Scented chemicals are used to mask the order from tobacco and other orders in casinos. The uses of scented chemicals that have major health implications associated with them are intentionally being pumped into casinos to mask tobacco smoke odors. Sooner or later their employees can become sick. The utilization of chemically fragrant products through a casino’s ventilation system is not healthy. Laboratory tests commissioned by the Campaign for Safe Cosmetics revealed 38 secret chemicals in 17 name brand products, with an average of 14 secret chemicals per product. The chemicals in commercial fragrances are synthetic compounds derived from petroleum and natural gas, known as petrochemicals. On average, 80% of fragrance formulations are comprised of these chemicals and in some cases, 100% of a formula can be synthetic.

A night of exciting entertainment and sparkling lights is more enjoyable in a freshly scented environment. Removing unwanted odors in crowded places encourages people to stay and play. Keeping guests on the game floor longer and higher revenues are guaranteed. Quality air scents denote a sense of elegance and class to an establishment, and visitors spend more time and money in these places.
Health advocates are warning gamblers that they may be risking their health along with their money when they play at casinos. A study released recently by two area health organizations found unhealthy levels of air pollution on the smoky gaming floors of casinos.

Casinos Exempt from Clean Air Laws
Casinos often receive exemptions to clean indoor air laws. That special treatment has put gaming establishments on the front lines in recent battles over whether to curb or extend legal restrictions on smoking. Nationwide, city councils and state legislatures have fought over including casinos in their smoking bans.
Casinos insist that their business relies disproportionately on smokers, while health advocates point to profitable casinos in states where smoking isn’t allowed.

The Problem with Cigarette Smoke
Cigarette smoke is a very difficult pollutant to remove from the air. This is because there are two major components to the smoke. The first problem of cigarette smoke is the many toxic gasses produced by burning cigarettes. Ammonia gasses, Carbon Monoxide, and phenol are just a few of the dozens of toxic gasses produced when cigarettes are burned; these gasses have foul odors and are highly toxic.
The second problematic component of cigarette smoke is the very high level of tar solids that are disseminated into the air when cigarettes are burned. This petroleum based tar clouds the air and sticks to every surface of the room. This tar discolors paint and it also has a terrible, sickening odor.
Summary
There are air technologies that can eliminate more than just tobacco odor and smoke. Using activated oxygen generated by molecular oxidizers can sterilize the air handlers and existing ductwork while killing harmful microorganisms such as Legionella, mold, and mildew in the process. 75% of people in the U.S. don’t smoke, and most of them are bothered by second hand smoke when they go to public places. So Casino patrons will breathe and feel better in an establishment if it is smoke free.