Where in your HVAC unit is the noise coming from?

The first step to solving a problem, any problem, is to identify its root cause – and this simple principle of life definitely applies when dealing with air conditioner noise, too. For this reason, we’ve listed the most commonly encountered sources of the annoying and potentially concerning sounds you’re dealing with.

For instance, it’s absolutely normal to hear water flowing into the pipes of A/C unit, both while it’s on, as well as immediately after you shut it down. Also, since the front cover of the unit slightly expands and contracts while the unit is on, you may occasionally hear a minute squeak. The same goes for a muted sizzle, which is produced by the unit’s automatic defrosting system. Other sounds, such as bubbling or clicking may indicate actual faults in the system, such as AC refrigerant leaks, or problems with your thermostat. It’s important to have a trained HVAC professional diagnose these problems: self-diagnosis and ‘treatment’ is not recommended when it comes to AC systems, be they split system and wall-mounted or not.

These are the most frequent causes of air conditioner noise and most HVAC technicians will go on endlessly hairsplitting them into various categories, such as clicks, whirrs, bubbling noises, and so on. While we advise you to always contact a pro when dealing with worrisome sounds which you cannot immediately identify, we will list some of the most usual noises that originate in the air handler section and the ductwork of your AC unit. Take the list below as non-exhaustive and binding in any way, but do use it as guideline for an initial diagnostic of your problem. 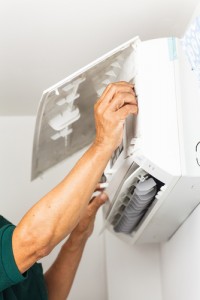 These will usually cause the ducts to roar or hiss. At this point in trying to identify the problem at hand, there are two options:

If you’re keen on home improvement and are also reasonably sure that the banging noise coming from inside your AC unit does not point to a serious issue, you can choose to encase it in paneling or simply deflect the noise, by fencing one of its sides. Experiment with this and find out which variant is best at reducing the noise – or simply choose to purchase a newer AC unit, since such problems are usually caused by older, outdated, low efficiency A/C units. The alternative is that the banging and/or clanking is noise coming from your compressor condenser – a problem that needs to be addressed by a certified professional.

This is usually a problem caused by electric wiring and elements, such as relay switches and other electrical connectors. It’s best not to leave such problems unattended, since arcing at circuit breakers are major fire hazards down the line.

If this type of air conditioner noise is heard at startup, it usually means that some piece of the hardware has become loose. Check your fan to see if it has come loose or bent and is now hitting against some obstruction.

They can come in under the form of hisses, whistles, roars, clunks, or clanks from the ductwork, as it expands and contracts. It may be the case that some internal noises, such as those caused by a fan, are being relayed by the ducts or that the noises are originating in a completely different location, which has nothing to do with your AC unit. Finally, check to see if there are no small animals trapped inside your ductwork because this, too, can cause annoying noises.