Inventor of Freon and Leaded Gas
Thomas Midgley, Jr. (May 18, 1889 to November 2, 1944) was an American mechanical engineer and chemist. He was a key figure in a team of chemists, led by Charles F. Kettering, that developed the tetraethyl lead (TEL) additive to gasoline as well as some of the first chlorofluorocarbons (CFCs). He was granted over a hundred patents. He was honored for his scientific contributions during his lifetime but, the negative environmental impact of some of his innovations has tarnished his legacy.
Midgley was born in Beaver Falls, Pennsylvania. His father was also an inventor. He grew up in Columbus, Ohio, and graduated from Cornell University in 1911 with a degree in mechanical engineering.
He started work at General Motors in 1916. In December 1921, while working under the direction of Kettering at Dayton Research Laboratories, a subsidiary of General Motors, He discovered that the addition of TEL to gasoline prevented "knocking" in internal combustion engines. The company named the substance "Ethyl", avoiding all mention of lead in reports and advertising.

Oil companies and automobile manufacturers, especially General Motors which owned the patent jointly filed by Kettering and Midgley, promoted the TEL additive as a superior alternative to ethanol or ethanol-blended fuels. December 1922, the American Chemical Society awarded Midgley the 1923 Nichols Medal for the "Use of Anti-Knock Compounds in Motor Fuels".

Lead Poison
In 1923, Midgley took a time off to cure himself of lead poisoning. "After about a year's work in organic lead," he wrote in January 1923, "I find that my lungs have been affected and that it is necessary to drop all work and get a large supply of fresh air." He went to Miami, Florida for vacation.

The team soon narrowed their focus to alkyl halides (the combination of carbon chains and halogens), which were known to be highly volatile and also chemically inert. They eventually settled on the concept of incorporating fluorine into a hydrocarbon. They rejected the assumption that such compounds would be toxic, believing that the stability of the carbon fluorine bond would be sufficient to prevent the release of hydrogen fluoride or other potential breakdown products. The team eventually synthesized dichlorodifluoromethane, the first chlorofluorocarbon (CFC), which they named "Freon". This compound is more commonly referred to today as "Freon 12", or "R 12".

Midgley died three decades before the ozone-depleting effects of CFCs in the atmosphere became widely known. Another adverse effect of Midgley's work was the release of large quantities of lead into the atmosphere as a result of the large-scale combustion of leaded gasoline all over the world. 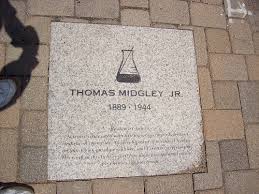